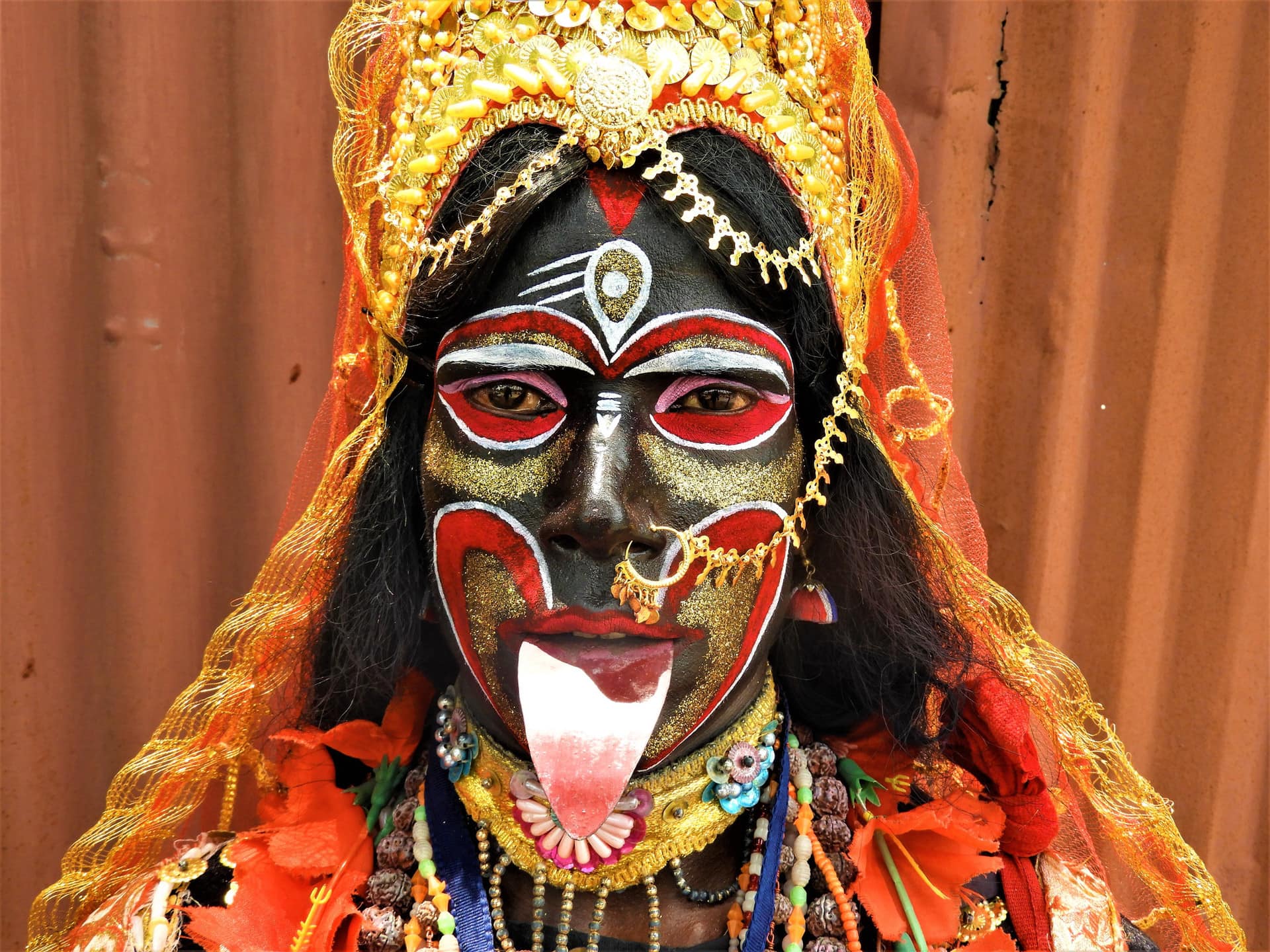 My first connection with India’s spirituality was a book on Hinduism iconography that I bought many years in a small French bookstore long before my first trip to the subcontinent. Its colorful cover with statues of gods and goddesses with multiple arms and artefacts left a lasting impression on me.

I usually escape the suffocating summer of the plains to fly to the high plateau of the Himalayas but this year, I decided to postpone my Ladakh pilgrimage for a yatra of another kind. I already attended the Kumbh Mela twice (in Haridwar and Allahabad) and I was starting to miss the energy of such extravagant events. This year, I could not miss the Ambubachi Mela taking place in Kamakhya Temple, Guwahati.

The origin of the temple is quite obscure. Originally, the concept of Kamakhya is derived from a tribal Mother Goddess. This mother cult of Kamakhya is said to belong to certain animist matriarchal tribes like the Khasis and the Garos. The full-fledged Khasi religion and its intricacies of ritual is now largely lost to history, but it was a venerable and complex philosophical and mythological system as important as any other religious tradition. One of the primary deities of the Khasis was Ka-mei-kha, meaning “She who created you”. She was a powerful mother goddess who created the universe, herself the cosmic womb, as we know Kamakhya to be. In the 10th century, it was already an important center of sacrifice, mysticism and sorcery.

The list of species goes on and on, and, of course, it included human, especially male. After the original, pre-Aryan structure was destroyed by Muslim invaders in 1498, its reconstruction was celebrated with the decapitation of 140 “volunteers” whose severed heads were presented to the goddess on bronze platters. In need of a particular divine favor, one 17th century ruler offered the goddess the heads of 700, apparently willing, devotees! On a less gore note, the site reflects the survival of an ancient and powerful tribal goddess who has survived through millennia, worshipped in different ways by many different communities, by touching each devotee with her power and grace as the primordial, original mother.

A later legend tells that the temple gets its name from the God of love, Kamadeva had lost his virility due to a curse. He sought out the Shakti’s womb and genitals and was freed from the curse. This is where ‘love’ gained his potency and thus, the deity ‘Kamakhya’ Devi was installed and worshipped here. Some people also believe that the Kamakhya temple is a place where Shiva and Sati had their romantic encounters. As the Sanskrit word for lovemaking is ‘kama’, the place was named Kamakhya.

There is no factual evidence to point a date on the first Ambubachi Mela, but we can say that it has its origin and initial influences from the local agricultural, social and religious ideas of the region. The Sanskrit term ‘ambuvaci’, from which the local Assamese word, ‘ambubachi’ or ‘ambubosi’ is derived, literally means the surge of water referring to the brimming of the earth’s waters from the onset of monsoon. This is a time when the earth is believed to be fertile and ready for procreation, hence the Ambubachi Mela is also called the Festival of Fertility. This annual festival is celebrated in June and usually coincides with the arrival of the monsoon rains, during which all religious rites and agricultural activities are temporarily suspended. This festival celebrates the menstruation of the goddess Kamakhya and the renewal of her fertility cycle. For three days the doors of Garbhagriha (the sanctum sanctorum) are closed while a huge crowd of devotees gather outside the temple to sing, dance and pray waiting for the temple doors to open on the fourth day, so they can visit and pay their respects to the goddess.

This was going to be my first experience of this powerful devotional festival. Accompanied by my Assamese friend Raju Kalita, we decided to attend the festival a day before the opening and re-visit the next day once the doors of the temple are opened so we can have 2 different experiences and perspectives. During our climb, Raju narrated me the interesting legend of the incomplete staircase leading to the temple.

The demon Naraka was in love with goddess Kamakhya and proposed her for marriage which she would turn down each time. The dejected Naraka would befall cruelty on the villagers to feed his rage against the goddess.

In order to get rid of Naraka, the goddess set a condition to marry him. She asked the demon to build a staircase from the bottom of the hill, all the way to the top before dawn. To distract him, she made a rooster crow before dawn which made Naraka give up the task instantly, explaining the incomplete stairway to the temple. When Naraka realized he’d been tricked, he chased the rooster and killed it. The spot where he killed it is now known as Kukurakata.

The temple is magnificently positioned atop of Nilachal hill (Nil = Blue, Achal = immovable or mountain) in the south-eastern part of Guwahati, with stunning views of the Brahmaputra and, on a clear day, way beyond to the peaks of the Eastern Himalayan range of Bhutan. We started by foot at the base of this hill, at a place called “Kamakhaya gate” on the A.T. Road, close to the Kamakhaya railway station.

The motorable road leading to the temple is closed during the Ambubachi Mela making it compulsory for pilgrims, devotees and visitors to trek up the hill to meet with the goddess.

Nilachal hill is only about 160 meters high from the Kamakhaya gate and the temple is just 2 km away – yet it can be a difficult climb on a hot and humid summer day. Fortunately, the path is shaded with trees, providing us temporary respite from the heat. The path was also lined up with shops selling food, idols, souvenirs and mysterious herbs and other religious paraphernalia that pilgrims will probably use during the puja.

Finally reaching the top, we removed our shoes and kept them near a shop. The swelling crowd is effectively managed by the police assisted by the Bharat Scouts and Guides. I was expecting a much more chaotic atmosphere, but at no moment I felt oppressed or bothered by the crowd. Volunteers were even offering water to people to avoid medical evacuation caused by dehydration. The air enveloped me with the heavy intoxicating fragrance of incense mixed with the sadhu’s fuming chiloms seeping into my very pores.

As I approached towards the temple, I heard music emanating from a dark and smoky room. Getting closer, I recognized Baul singers, the wandering minstrels whose song and dance reflect the joy, love and longing for mystical union with the Divine. Bauls are free thinkers who openly declare themselves to be mad for the God who dwells within us all. They include Vaishnav Hindu sadhu and Muslim Sufi saints and are a very heterogeneous group.

Further, families queued with bleating goats and cooing pigeons to offer in sacrifice to the goddess. The executioner, soaked in blood, are mechanically busy beheading the animals and piling their beheaded heads in a corner.

Closer to the sanctum sanctorum, a colorful ribbon of devotees patiently await the opening of the doors to be let in for worship. They even sleep right there to secure a better chance of entering the temple at dawn.

I am amazed by the temple architecture. It has a beehive-like Shikhara, with delightful, sculptured panels and images of Ganesha and other Hindu gods and goddesses on the outside. Though the main temple is dedicated to Kamakhya, there is a complex of temples here devoted to the ten Mahavidyas (Great Wisdoms): Matangi, Kamala, Bhairavi, Kali, Dhumavati, Tripura Sundari, Tara, Bagalamukhi, Chinnamasta and Bhuvaneshvari. This makes it all the more important for the practitioners of Tantra and black magic.

It is believed that the tantriks and sadhus here are capable of performing miracles. They even claim to be able to cast an evil spell on others but they use this power judicially. Many hindus go on a pilgrimage to Kamakhya to be blessed with marriage, children, wealth and other desires.

A good number of mythological stories, as well as oral legends, are associated with the origin of Kamakhya temple. It is known to be one of the 52 shakti peethas of the goddess Shakti. Legend has it that a furious Shakti jumped into fire after her father insulted Shiva, who then performed the tandava (his destructive dance form) while carrying Shakti’s burning body. To stop Shiva from completely destroying the universe, Vishnu released his Sudharshan chakra that split Shakti’s body into 52 parts. The Kamakhya Temple was built where the goddess’s yoni (womb and genitals) fell.

After admiring the spaceship-like temple from a flock of stairs dominating the main structure, I joined the crowd again leading me to the famous Saubhagya Kund located just behind the temple. In this pool, pilgrims and sadhus perform the snaan (ablution) to cleanse their body and purify their soul.

The queue to get inside the temple was a never ending coil of devotees which kept me at the far end of it. So, I decided to quit my darshan (view of the deity) and let Raju fill me in with what he knew about the sanctum. I am told, that a dark narrow path cut through a rock takes you down to a cave, where a small natural spring bathes a yoni (vagina) shaped rock structure. The water of the spring naturally mixed with an iron compound has a blood-like red tinge to it. Thus the journey to the inner sanctum can be seen as a metaphorical journey back to the womb of the mother goddess, followed by rebirth.

On reaching the maddening road, down the hill where we parked, I realized what a trip out of space and time it had been. Apparently, to obtain the full power of the Mother Goddess, one has to visit Kamakhya three times.

Next month, in August, thousands of brightly dressed devotees, encircled with brilliant fresh floral necklaces and adorned with the vermilion die will flock to Kamakhya and make trance offerings to the Serpent Goddess (Manasa Puja). I hope I will be able to witness this unique religious devotion and discover the sanctum sanctorum on my third visit.