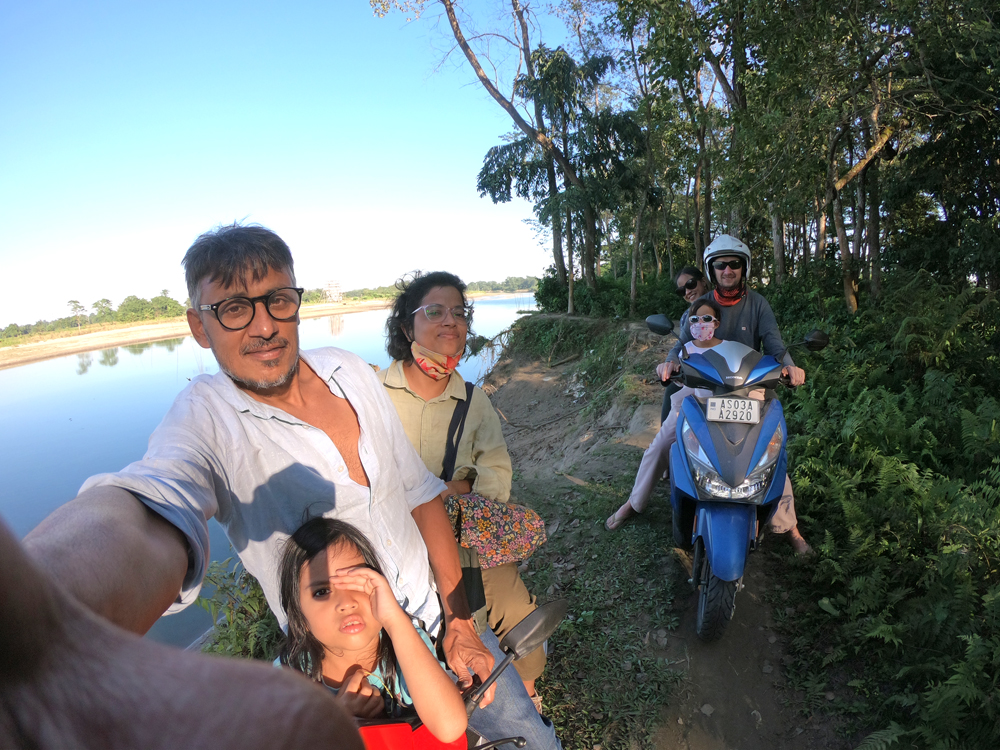 Can you imagine the excitement of two five year olds on the day they would ride a ferryboat?

Aboard the Gurkha jeep, we are back on the road again with two very enthusiatic kids. We were heading for Nimatighat in Jorhat which serves as a pier for Majuli Island. The girls just couldn’t wait to board the ferryboat. When it arrived, they had already made plans of where they would sit and what they would climb. It had to be the terrace, they said. We sat on sacks of sand lining the edge of the riverbank, patiently observing a slow system of organized chaos preparing for boarding. People, cargo, cars, bikes and scooters will soon pour in, and all at the same time it seemed. This is how it’s done every day. And that is how it will be done on the girls’ first ferryboat ride to Majuli island.

Majuli means ‘the land between two parallel rivers’. It was formed by the confluence of Brahmaputra and its anabranches. It was once the world’s largest river island. But today stands at second place, constantly losing its land to erosion and flood caused by the mighty Brahmaputra river. It is estimated that about two third of its area has been eroded by the Brahmaputra in the last 40 years. A once 1,250sq.kms land is now reduced to 420sq.kms and diminishing every day. The future of this fragile island is now in our hands, and how we begin to take action on a global, local and personal level to save what we have. As travelers visiting this cultural capital of Assam, if done responsibly, much can be contributed to sustain and conserve life on the island.

Aboard the ferry, we spoke a lot about the island, of the vastness of the Brahmaputra and the life it supports and take. For the girls, this was a water paradise, a land of limitless slush and splash. The next two days we would rent scooters to tour the island for water-spots and if possible do other things I had in mind. I had to adjust the itinerary in a way that the bike rides we planned and the places we wanted to visit would have to be interspersed with enough water spots for the girls to release their energies.

Our first stop was a little riverbank under a bridge we crossed on the way to the Mishing village. Its shallow clear waters and clay sediments was just what the girls were after. Time will stand still for as long as they want it to be. And just before they would assume it to be endless, we gradually pulled them out for a walk in the village, a quintessential part of all my itineraries. We quietly strolled its walkways to soak in the slow village life and catch a glimpse of the Mishing’s unique bamboo cottages built on stilts. The women worked on the loom below the stilt cottages weaving their textiles, their children on a mini loom next to theirs, and everyone engaged in various household and field activities in a serene euphony. This was a slow village life much to the contrast of our fast-paced city lives. I scanned around to see in a panorama that the village was entirely made of bamboo. It was truly a living sustainable village model.

The girls were slowly beginning to soak in the calmness, just what we needed before a hearty lunch at Dekasang, an artist retreat we were heading for next. Here was where I would treat my friends to my all-time favorite barbeque fish marinated in mustard sauce and a splurge of other local delicacies. After lunch, we rode back to the guest house still reminiscing the flavors of that barbeque fish. We spent a lazy afternoon relaxing in the guesthouse while the girls continued their sand-play in the garden. In the evening, we sampled a local rice beer with a smoky flavor, locally called “kala apong”, while warming up to a bonfire and the company of each other. Every day was a celebration of togetherness, a thing we had learnt to not take for granted in these uncertain times. That night dinner was slow food at the famed “Maison de Ananda”, in its traditional Mishing kitchen.

Seated on a lattice bamboo floor around a central fireplace, we huddled around the fireplace to get a better view of our dinner cooking. The lady of the house was adjusting skewers of meat placed around the fire, while slow cooking a fish curry with local leaves on it. She did it all effortlessly, juggling between dishes while also prepping the table for us. Our plate was a beautiful presentation of local food – steamed rice wrapped in banana leaf, meat on skewers and two unique varieties of plant food. If food was the way to the heart, this was it. It was the perfect ending of a perfect first day in Majuli.

Apart from its distinctive tribes, Majuli is also home to the Neo Vaishnivite monks who practice a monotheist form of Hinduism known as Vaishnavism. In the 16th century the social reformer Srimanta Sankardev founded this unique Hindu sect and established monasteries known as “satras” to serve as centres for artistic and spiritual expressions that are practiced till date. The monks engage in devotional music, dance and art to depict scenes of the Hindu epics – The Ramayana and the Mahabharata. Witnessing a dance in the satras has always been part of my Majuli itinerary, but not this time. We were not expecting two very energetic girls to sit tight and watch a dance form they had very little understanding of. The next day, we will only stop by the Samaguri satra to view the various processes that go into the making of the special masks the monks use in dance and theatre especially during the Raas Mahotsav festival (a large open-air festival that takes place every year on the full moon of November). Our focus, being mask making, we headed straight for the workshops to view the monks at work. Here the girls intriguingly watched the monks work with clay and paint to create their colorful striking masks.

In conversation with one of the monks, we got a better understanding of their various processes of mask making. This was not just an art form, but something they practice in deep mediation and devotion. They begin by first creating a three-dimensional bamboo framework for the face. Then strips of cloth dipped in clay harvested from the banks of the Brahmaputra are layered over the frame, and over it a blend of cow dung and clay is used to create the necessary depth and contour. Fibers like jute create beards and other facial features. Only earth pigments were used to paint the sculpted faces. This peaceful mask-making workshop in Samaguri satra was a good way of introducing the unique monks to the girls. Their curious faces scanned every mask on display, eager to try them to perform their antics. With a Garuda mask and a Hanuman mask they had become mythical characters of an epic drama, but we were not encouraging play with these art pieces. One picture was all we wanted as souvenirs of their first visit to a satra in Majuli.

Our next stop was the hidden village of Salmora for a tactile experience in pottery. Clay is probably one of the best play materials for kids. It allows them be free and creative. The girls watched the potter pound the clay with wooden and bamboo tools. They carefully observed the potter shape the pots by hand, using special tools to achieve the desired forms. Having trained enough at home with play dough, they couldn’t wait to get their hands on the clay and do it their way. Soon, mini cups, pots and plates emerged from a lump of clay they were shaping. We were not to destroy these soft forms, but carefully pack and take them with us, an impossible mission we just couldn’t refuse. We also bought some extra clay as backup just in case we failed to keep their created forms intact all through the bike ride back to the guesthouse.

After hours of clay play, we decided to wrap it up and head for lunch by the banks of the Brahmaputra that flanked the village. Under an elephant apple tree, we spread our picnic to enjoy a simple meal of rice and salad, while watching the calm waters of the Brahmaputra. Just after, the girls had found a small inlet of the river a few meters away where they would soak and splash for hours on end. Getting them out of the water was a tricky affair, requiring a lot of coaxing and the promise of a movie that night.

On our way back to the guesthouse, we stopped at a mustard oil factory to see an ancient factory churning quality oil using old machines for oil extraction. The girls opted to stay away from the strong aroma of mustard in the factory and instead play with the heap of mustard seeds spread to dry in the front courtyard. There was always something for them to do, on a parallel itinerary not too different from ours. With two happy kids, I was overjoyed to have been able to design and execute an itinerary most suited for a family trip in Majuli.

That night we would ease it off with some rice beer around a bonfire in the garden of the guesthouse. The kids were inside our room relaxing and enjoying their screen time as promised earlier. They had had enough of water, enough of mud and clay and enough activity to release all their pent up energies.

Once again Majuli has rewarded me with an unforgettable holiday. The next day we’re heading back home as shiny happy people, ready to take on life once again. As for the girls, their stories will continue for a long time and maybe altogether different from how I’ve penned it here.

You missed the part 1 of our adventure in Kaziranga ? Read it now : The Adventures of a Family in Assam – Part 1: Kaziranga