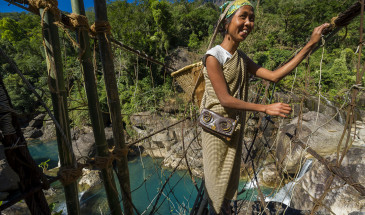 
Meghalaya the abode of the cloud is the place with the highest rainfall in the world. The state also hosts Mawlynnong, the cleanest village of Asia. Unlike many Indian states, Meghalaya has historically followed a matrilineal system where the lineage and inheritance are traced through women; the youngest daughter (Khaduh) inherits all wealth and she also takes care of her parents.

Children take their mother’s last name and men move into his wife’s home after marriage. Moreover, the Khasi language originally had no script of its own. The Khasi language is one of the very few surviving Mon–Khmer languages in India today.

Welcome at Guwahati airport. You head to Meghalaya, the abode of the clouds, and its beautiful luxuriant hills. The road serpentines through sylvan hills and wrapped in the beauty of an assortment of green Khasi-pines and the azure blue skies. You can stop in Nongpoh for a pineapple tasting. Continue up to Umiam Lake and then Shillong. Night in hotel.

This morning you drive to Cherrapunjee. The drive gives a spectacular view of deep gorges and the rolling hills luxurious with tropical vegetation that boast innumerable variety of ferns, moss and orchids. Explore Shillong peak, Mylliem village, Nohkalikai Falls, Mawsmai Caves and Nohsngithiang Falls. Road back to Shillong. Evening at leisure. Night in hotel.

After breakfast, proceed for Dawki near Bangladesh border and Mawlynnong, Asia’s cleanest village. In the evening, road back to Shillong. Night in hotel.

After an early breakfast, depart to Guwahati. In the afternoon, local sightseeing (Srimanta Shankardev Kalakshetra, Guwahati Zoo, State museum and Emporiums for local ethnic products. You may visit Balaji Temple or take a river cruise (optional) to watch the sun go down on the Brahmaputra River. Night in hotel.