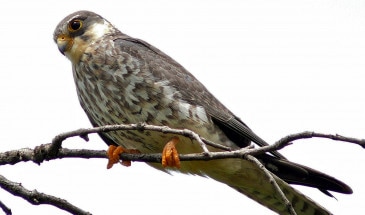 
Witness the spectacular migration of Amur Falcons in Nagaland as they arrive end of October till early November in thousands from Sibera & northern China before taking off for Africa. It is believed to be possibly the biggest falcon roosts in the world. This is a lifetime experience. The best of natural wonder, community tourism and local experiences. With wildlife and birding expert.

The Amur falcon is a fascinating bird. It is only the size of a pigeon, but it has one of the longest migratory paths in the bird kingdom, travelling up to 22,000 km in a year. It also survives wholly on insects including termites, making it a very useful bird to have around for farmers.

It is also one of the most successful conservation stories of recent times. Till a few years back villagers in Nagaland have been hunting or rather massacring the birds for their meat. Green groups estimate that at least 120,000 birds were killed every year.

Alarmed by these shocking numbers local conservation agencies of Nagaland, the church and the villages of Pangti, Ashaa and Sungro, stepped in and launched a conservation & patrolling programme called ‘Friends of the Amur Falcon’. This entire effort has been led by a fiesty journalist-turned-conservationist Bano Haralu.

Today hunting the Amur Falcon is a rare occurrence. And the Wokha district of nagaland has become the Falcon capital of the World.

The Amur Falcon, a slim little raptor that feeds largely on insects, is slightly bigger than an American Kestrel. The males are dark gray above, paler below, with elegantly contrasting white wing linings and a splash of bright rufous on the thighs and undertail coverts. The females and juveniles are very different, their white undersides barred with black and lightly washed with buff on the chest, the face distinctly “mustached” after the fashion of most falcons. All ages and sexes have bright carmine legs and feet. The Amur was long lumped with the very similar Red-footed Falcon of western and central Eurasia. Amurs, however, breed in wooded margins and the edges of savannas from eastern China and North Korea to parts of Siberia and Mongolia (an area roughly a third the size of the Lower 48 in the U.S.), from which they make one of the longest migrations of any raptor in the world, some 8,000 miles one way to southern Africa.

In the process, they also undertake the greatest over-water crossing of any bird of prey, traversing as much as 2,400 miles of the Indian Ocean. Over water, the hot-air thermals and deflection currents that assist raptors migrating over land, allowing them to soar for hours and save energy, are largely absent. This means the falcons must beat their wings continuously on their transoceanic trip, which may take them four or five days. If they’re to survive, they must top off their tanks before they leave land.

And so in late October and early November, the migrant falcons pause for some weeks in Nagaland. At this same time of year, just after the monsoon, there is a great stirring underground as countless subterranean termite colonies prepare for the mating season. Worker termites chew tunnels to the surface, out of which emerge trillions of winged, inch-long fertile adults known as alates—fat-rich and the perfect food for an insectivorous falcon about to risk an ocean crossing.

Arrival in Delhi or Kolkata

Early morning drive to Hoolongapar Gibbon Wildlife sanctuary to explore the most concentrate habitat of Western Hoolock Gibbon. We’ll have the opportunity to watch Stump-tailed Macaque, Pig-tailed Macaque, Capped Langur, Malayan Giant Squirrel and more. We will also have the chance to see Sultan Tit, Scarlet Minivet, Pale Blue and Pale chinned Flycatcher and others. Night in guest house.

Early morning drive to Pangti village in Nagaland through Merapani. Remote. No infrastructure. Amazing! Nagaland is India’s most remote state. Lying east of Assam, Nagaland rests on the border with Myanmar and has a similar culture. The tribal region was only ‘opened’ by the Indian government in very recent years, to allow outsiders to explore the region. Pangti village has hosted the Amur Falcons for few years, where it roosts near the Doyang Reservoir. Night in homestay. Shared bathrooms and bucket wash bath-house.

Today we will venture to the falcon watch platform early in the morning to enjoy thousands of Amur Falcons. Returning to our accommodation for lunch we will search for falcons and other birds along the road in the afternoon. Night in homestay.

After breakfast, drive to Kaziranga National Park famous as one of the only natural habitat of the Great Indian (Asian One-horned) Rhinoceros. Night in lodge. Kaziranga National Park, in Assam, covers about 430 km², bordered on the north by the Brahmaputra River and on the south by the Karbi Anglong hills. The largest number of one-horned rhinoceros in the world roams its swamps, grasslands with tall thickets of elephant grass and areas of mixed deciduous and tropical semi evergreen forest. It is home to a wide variety of other animals and birds, and the open vistas make it relatively easy to see many species of wildlife in a day. Along with the Indian Rhino, the Park contains about 35 major mammals, including Wild Elephant, Tiger, small population of Hoolock Gibbon, Capped Langur, Bristly Hare, Hog Badger, Otter, Leopard, Wild Boar, Sambar, Swamp Deer, Hog Deer, Muntjac, Water Buffalo and Gaur. Among the rich birdlife are the rare Greater Adjutant stork, Bengal Florican, Black-necked Stork, Lesser Adjutant stork, Pallas’s Fish Eagle, Swamp Partridge, Grey Peacock-pheasant, Oriental Pied Hornbill, Green Imperial Pigeon, babblers and thousands of migratory birds, seasonally attracted to the various water areas of the park from as far away as Siberia.

In the morning, explore the Eastern Range of the National Park by jeep safari. The eastern range of Kaziranga known as Agoratoli consists mostly of woodland and is famous for its wide variety of birds. It is home to a variety of migratory birds and is also known to have large population of wild elephants. During our exploration in Agoratoli you will visit the Shola water body and here one can stop for some time at Shola Tower to view the birdlife and other animals. Return to the hotel for lunch and siesta. In the afternoon, enjoy a safari in central zone called Kohora, as this is the smallest zone of the national park having a maximum density of one horned Rhino. The safari will take you to the very narrow path of the national park within the elephant grass and will enhance the chances to get closer to the wildlife. The central range of the national park is mix of Grassland and Woodland. A number of water bodies are also there which is perfect for the birdlife and home to pelicans, storks and darters. Night in lodge.

As you will wake up a little early to reach the Burapahar Range of the national park, you will be provided with packed breakfast. You can go trekking or walk inside the Burapahar range of the National Park. The track will start from Pani Juri Camp with a naturalist and forest guards, from here you will walk up to the banks of River Brahmaputra. You will go through the midst of the woodland that Burapahar is so famous for, during our trekking you will be able to see a lot of wildlife like Capped Langurs, Elephants and the Great Indian Hornbill and Hoolock Gibbon. After trekking you will return to Pani Juri camp lunch in a roadside restaurant. After lunch you will again visit the national park for your second vehicle safari of the day. This time you will explore the western range of Kaziranga. Here you will follow the route Bagori – Dongabeel – Rowmari – Rajapukhuri – Monabeel along with bank of Mori Diffalu river. On your way back to resort you can also stop at the Donga watch Tower for sometimes to have the glimpse of Wildlife. Later return to the lodge.

Road to Nameri National Park on the foot hills of the Himalayas and bordering Arunachal Pradesh. If early arrival, you can enjoy a nature walk in the afternoon. Night in hotel or resort. Many activities can be organized around the park: angling, rafting, hikes...

Today, go for some exciting activities: enjoy white river rafting, against the divine backdrop of lush forests and snow-capped mountains or try your hand at casting for the elusive and endangered golden mahseer fish, a denizen of the waters. This is part of an ecological campaign to save the mahseer - so part of the river is protected and the fish are caught and then released in a bid to stabilise their dwindling numbers. Night in ecocamp. Activities: - Jungle Walk - Soft Rafting on the Jia Bhoroli River for birdwatching - Visit of a Mising village - Visit of the Golden Mahseer Conservation and Breading Center - Visit of the Pigmyhog Conservation and Breading Center

After breakfast checkout and drive to Guwahati airport to board your flight to Delhi. End of our services.