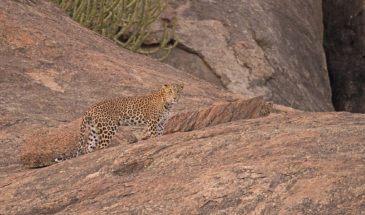 The National Park of Gir in Gujarat is the only place in the world where you can see Asiatic lions in their natural habitat! Enjoy thrilling safaris that take you through the rugged terrain of this savannah-like forest that provides perfect camouflage for brown-skinned Asiatic lions. The Sasan Gir forest is home to more than 500 lions, 300 leopards, 40 other species of reptile and amphibian animals, as well as hyenas, Indian foxes, cabbages (tetracera antelope), not to mention the many birds that reside there.

Then head to Blackbuck National Park. Velavadar National Park is a hidden gem, one of the last remaining grassland stands in the vast alluvial plain that runs along the Gulf of Khambatt, called Bhal. The Bhal is a tapestry of cotton, wheat and other agricultural land, salt plains, grasslands, pastures, freshwater wetlands and coastal marshes. Nearly forty species of grasses have been identified in Bhal.

The national park is a magnificent expanse of 1400 km² of savannah meadows and shrubs, largely devoid of trees, which offers a magnificent and enchanting spectacle. It is wonderful to watch the meadows change colour at different times of the day, and also at different seasons of the year, from bright greens to golden browns to grasses that sway in a light breeze. The beauty of the prairies is enhanced by the abundance of flora and fauna ranging from butterflies to dragonflies to India’s largest antelope, the Nilgaults.

Continuation to the Little Rann of Kutch, a geographically unique landscape that was once an arm of the Arabian Sea. As a land separated from the sea by geological forces, it has become a vast plain without relief encrusted with salt flooded with water during the rains.

The safari through the Little Rann visits the ‘bets’, islands located on the ancient seabed which are now higher terrain covered with grass and brush.

These “bets” support a variety of wildlife, including the “Gudkhur” (Indian Wild Ass) not found elsewhere. The indian wild ass is a member of the horse family. Able to reach high speeds when galloping on the Rann, the wild donkey usually moves in small herds.

Finally, further north, we enter Rajasthan, in Bera, territory of the leopard which coexists with the Rabaris, a community of shepherds who are distinguished by their white tunic and red turban.

Welcome to the airport and transfer to the hotel.

Early this morning, fly to Rajkot. Upon arrival, transfer to Gondal to see the Naulakha Palace and the incredible collection of private cars of the Maharajah. Then drive to your hotel on the edge of the Gir National Park.

Note: It is possible to take a Flight from Mumbai to Diu to reduce the travel time, but flights only operate on Mondays, Tuesdays, Thursdays and Saturdays.

Spend the next 3 days in Gir National Park with a safari in the morning and another in the afternoon, enjoying wildlife watching at Gir National Park. Go on a Jeep safari in search of leopards, jungle cats, hyenas and chinkaras (Indian gazelles). Gir is the last habitat of the endangered Asian lion, making it one of the most important protected areas in Asia.

After breakfast departure by road to Velavadar. Night in a lodge.

Blackbuck National Park is a unique grassland ecosystem with preserved species such as the Indian wolf, the striped hyena and the cockroach. Other species inhabit the park including nilgauts, wild boars, foxes, jackals, shoes (jungle cat) or hares as well as many rodents. More than 1,500 migratory birds, raptors and waders are also present in this park. The main attraction of the park is probably its large population of blackbluck antelope, endemic in India and ranked among the most beautiful and fastest over long distance.

Blackbuck National Park exploration day with a morning safari and an afternoon safari. Night in a lodge.

Road to the Little Rann of Kutch via swamps such as Viramgam where endangered bird species such as the sociable ring and the antigone crane have been seen recently. In winter, the swamps of Bajana are home to migratory birds. Night in a hotel.

Day of exploration of the reserve. Night in a hotel.

Little Rann of Kutch is a desert expanse, punctuated by salt flats and encampments where the population lives from salt extraction. It is also a sanctuary of indian wild donkeys: the ghudkhar; it covers nearly 5000 km2 where about 3000 wild donkeys live in groups. You can observe exotic wildlife and rare birds. One can also get an overview of the lives of many ethnic groups and local tribes, who live in and around the Rann: the Kolis, Rabaris, Bajanias, Kutchis, Gujjars and the Bharvads.

Long road from Gujarat to Rajasthan to reach the hamlet of Bera located in the Aravalis mountains of Rajasthan and surrounded by lakes and dams. Night in a lodge.

2 days of exploration with 2 safaris a day in the vicinity of Bera which is neither a sanctuary nor a national park but the area is known for its splendid appearances of leopards. You can also visit Jawai Dam, the largest man-built dam in western Rajasthan and have an impressive view of the village from the top of the castle.

After breakfast, transfer to Udaipur airport for the flight to Mumbai. End of our services.