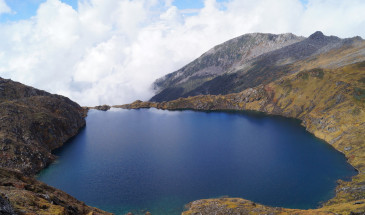 
For nearly 2000 years, the notion of an earthly paradise or Shangri La hidden among the peaks of Asia has captivated the human imagination. Western explorers combed the region in search of this hidden land of bliss and nectar described in ancient Buddhist texts as the Pemako or the Lotus land. According to Buddhist tradition Pemako is one of the 16 earthly paradises, a promised land free of worry, the ultimate hidden haven. The place is where, it is prophesied that the seed of humanity will thrive at the end of the world in famine and calamities.

The Pemako is consecrated to the female divinity of Dorje Phagmo and its sacred geography is mapped to the body of this sleeping Goddess. Her head is the Kangri Kangpo, her two breasts is Namche Barwa and Gyala Peri respectively. The lower part of her body lies in Yangsang or the innermost pemako which is the upper Siang region of Arunachal Pradesh. In the confluence of Siang (Tsangpo) and Yangsang is the sacred triangle Kila Yangzom the vulva of Goddess Dorje Phagmo. This supreme of sacred lands is now open to the world to discover and marvel. Every year pilgrims traverse the area on Kora (circumbulation). Covering the sacred Devakota, the gathering place of Dakinis, the holy Titapori Mountain, Pemashree and Riu Tala (Eko Dumbing for Adis).

In the beginning of the 20th century, many Khampas from Tibet made the long, arduous trek to Pemako in quest of succour and refuge. They are one of the major inhabitants of the region, along The Adis, Mishmis who were the original inhabitants here. The region is a melting pot of different tribal cultures, where all the tribes exist in complete harmony among themselves and the nature. Walking through pemako one can see Adi, Memba, khampa and Mishmi villages with their distinctive culture, faith and lifestyle.

After an arduous trekking, you will reach the sacred Titapori Mountain at 4 300 m. The landscape here forms a fully opened lotus. In the lake of Danakosha there is the Citta Island, ‘the heart of the world’. According to ancient pemako guide book; upon merely seeing this place ones obscuration of knowledge will be cleared and negative Karma accumulated over a thousand eons will be purified. From here one have breathtaking view of the majestic Himalaya range with Namche Barwa peak and Kondu Dosem Potrang the mythical palace of Dorje Sempa in the north, the Pemashree and the Eko Dumbing or Riu Tala of the Abroka range towards west and south respectively. It is a treasure trove of flora and fauna with all kinds of medicinal and aromatic plants and rare flowers. It is also a Rhododendron fairyland. 44 new species was discovered here in 2005. Wildlife: Goral, Takin, Musk deer, Snow leopard, Tiger.

The Adi hunters come to the high mountains in an annual expedition to collect aconite poison and offer their prayer and homage to the Deities of the mountain.

Welcome at the airport and transfer to the hotel. Evening at leisure. Night in hotel.

We leave the hotel at 6:30 AM for the Dibrugarh Ferry Terminal. A beautiful cruise across the braided flow of the Brahmaputra awaits us. Keep an eye out for freshwater dolphin during the winter months! After reaching the other side of the Brahmaputra, we transfer to a bus for the journey to Arunachal Pradesh's border post. There we clear entry with our Restricted Area Permits, and continue on to reach our hotel in Pasighat by early afternoon. The afternoon is free to explore Pasighat's traditional market, buy souvenirs, and explore. Night in basic hotel.

Drive to Jengging. The drive will be through bad roads, but the presence of breathtaking valleys of the Siang River will be worth the journey. You may also visit a Adi Tribe authentic village, and walk in sustainable bamboo hanging bridges. Night in basic hotel/government guesthouse.

Through pristine landscapes, drive to Tuting, the last motorable town, near to India’s border with South Tibet. Night in a basic hotel or government guesthouse.

After breakfast, begin trek to Kuging Village by crossing the Siang River in a suspension bridge and through simple villages of the Adi Tribe. The hike will be through terraced farmlands and the Yangsang Chu River, until a climb to Kuging Village, the last village in the route for the coming ten days. Night in tent near the village.

After breakfast, trek to Mabi. The vegetation will change from tropical and semi-tropical to eventually alpine sanctuaries. The climb is moderate through forests of rhododendrons and pine, though care must be taken against leeches. On clear days, the icy peaks of Namcha Barwa are visible, the 'left breast of almighty Goddess Dorje Pagmo'. Night in tent.

A short trek from Mabi to Yungchak, with a few uphill walks along ridges, though forests that are a rhododendron fairyland, along with the breathtaking views of the remote eastern Himalayas (South Tibet). Night in tent.

Trek to campsite at Kanebenga. The hike will be mostly along ridges in forests filled with rhododendrons and pine, with terrain eventually changing from barren to rocky. There'll be a few uphill and downhill walks. Chinese villages can be seen from here. The surrounding views of mountainside is breathtaking. Night in tent.

Trek to campsite of Pao Lipik, leaving the alpine forests and entering barren landscapes filled with beautiful high altitude lakes. The hike will be moderate with uphill and downhill walks, but can be tiresome in the extreme heights. On clear days, the peak of Namcha Barwa is visible. Night in tent.

Trek to Danakosha, the sacred lake with the island of tseta (heart). The hike will be through barren ridge of rhododendron scrub until a steep climb to a higher ridge from where you will get magnificent views of the holy Titapori Mountain. The landscape here forms a fully opened lotus. Each year Buddhist pilgrims visit these high isolated ranges to pray in the heart lake, as according to Buddhist Pemako texts, merely seeing this place, a pilgrim opens his consciousness to unlimited knowledge and his/her karma is purified. Night in tent.

Today, you will do a kora (circumbulation) around five sacred lakes of Danakosha, out of a total of 118 lakes which are believed to occupy this region. These lakes are believed to bless one with tantric powers. On a clear day, the very holy mountain of Kundu Dorsempotrang is visible, which is 'All Gathering Palace of Vajrasattva', a tantric deity symbolizing pristine, unobstructed awareness. Seeing this mountain liberates a person instantly. Night in tent.

Trek to Wangchen Phukpa. The hike will be up and down ridges, crossing Titapori where it is believed that Padmasambhava has hidden many treasures and scrolls. At the campsite of Wangchen Phukpa, one feels on top of the world. The area is abound with exotic wildlife with chances of seeing Musk Deer, Ibex, Takin, Mountain Goat, Red Panda and many species of birds. A tailless rat called locally as saray is found commonly. Night in tent.

Trek to Dungchen Droma, crossing huge boulders fallen down by snow, and then continue through pine and rhododendron forests, until a downhill trail covered with thick bamboo that will end at campsite. On clear days, magnificent views can be seen of the eastern Himalayas. Night in tent.

Start early for a trek to Tashi Droma. It will be a steep downhill hike through forests filled with orchids, bamboos and wild flowers. The vegetation will be thick due to direct sunlight, and care must be taken with the wet slippery ground. The hike will end at River Jiang-chu where you’ll dross a cane bridge to arrive at campsite. A swim in the river will be much healing and is highly recommended. Night in tent.

Trek to Tashigang Village, the first village you will see in ten days. The hike will be along the Jiang-chu River in slippery grounds, with moderate uphill and downhill walks. Precaution needs to be taken here against the menacing leeches. The hike ends at Tashigang, a beautiful and quaint little village where 200 people live in 16 houses. Night in tent.

Begin the trek by visiting the holy site of Dewakota and do a kora around it. Legends say Dewakota Mountain is where Padmasambhava hid many treasure and scrolls, and enlightened persons have the key to finding them. This hike will be a steep descend through huge rocks and eventually crossing a cane bridge and climbing steps to reach Dewakota temple. Later after kora, hike onwards to the village of Mankota. Night in tent.

Trek to Payengdam, a village located spectacular at a hilltop which offers excellent views of the mountain ranges. The hike will be gradual with normal climbs. Along with a monastery, a very impressive community center is established here, supported by pemakodproject.org, for the refuges of China occupied Pemako. Night in tent.

Trek back to Tuting by descending alongside the Yangsang River. The hike is steep through tropical forest, until it catches up with the trail of the first day, thus completing one kora (circumbulation). The trek to these remote sacred sanctuaries ends at Tuting. Night in government guesthouse.

Drive to Jengging. The drive will be through bad roads, but the presence of breathtaking valleys of the Siang River will be worth the journey. You may also visit a Adi Tribe authentic village, and walk in sustainable bamboo hanging bridges. Night in basic hotel/government guesthouse.

Drive to Pasighat visiting the tribal villages of Pado, Sili, and Bodak on the way. In the afternoon you get to visit the Pasighat museum and handicraft centre. Night in basic hotel.

Drive upto Oiramghat where we enter Assam to take the ferry across the braided flow of the Brahmaputra. Keep an eye out for freshwater dolphin during the winter months! After reaching the other side of the Brahmaputra, drive to Dibrugarh. Evening walk around town. Night in hotel.