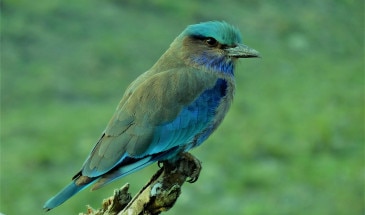 
This program guides you through a diversity of wildlife parks where you can observe the birds in a very detailed manner. Our bird guide will be along with you to spot and identify the birds. You will be walking through breathtaking areas of northeast India. Except for Namdapha NP and some remote regions of West Arunachal, all birding areas are accessible by jeep. In addition vast areas remain unexplored, waiting for the intrepid birder.

You start your journey in the Nameri National Park which covers an area of 200 Km² bordering Arunachal Pradesh. It is also the core area of Nameri Tiger Reserve (344 Km²). The Jia-Bhoreli River and its tributaries namely the Diji, Dinai, Doigurung, Nameri, Dikorai, Khari… crisscross the park. During rainy season, a few jheels also dot the area.

You continue North to the Eaglesnest Wildlife Sanctuary, located in Western Arunachal Pradesh and is the highest in elevation. Named after the Kameng river which drains the basin of Gori Chen and Kangto peaks, this region is spread below the Himalayan watershed on the borders with Tibet in the North and Bhutan in the West. The topography is truly amazing rising from the Brahmaputra Valley in Assam through tangled ridges at elevations of around 1500 m to 7080 m on the watershed of the Himalayas. It is truly a bird paradise with around 450 species of birds.

Then you head to the Pakke Wildlife Sanctuary, situated at an altitude ranges between 100 to 2000 m and covering an area of 862 Km². Walking inside the park is permitted only with a forest guard. You can also enjoy a very good birding around the areas in woodlands of forests department complex.

You return in Assam on the southern bank of the Brahmaputra River to explore Kaziranga National Park, a World Heritage Site and home to more than 75% of the world’s total population of the Great Indian One Horned Rhinoceros. It is also more than 450 species of birds.

You continue upstream along the Brahmaputra to reach Dibru-Saikhowa National Park. Located 12 Km away from Tinsukia, this park remains open most of the year. Spread across 650 km², it has the most distinct and vibrant wilderness on earth and is known for its pristine scenic beauty. With Brahmaputra River and Lohit River to its north and Dibru River to its south, the forest in this park ranges from semi-evergreen to deciduous to littoral to swampy marshes with patches of wet evergreen jungles where can be spotted more than 350 species of birds.

Last but not least, Namdapha National Park in Changlang district on the eastern tip of the state which was declared Tiger Reserve in 1983 by the government of India. Located close to Himalayan ranges, the stunning park that lies across various altitudes ranging between 200 and 4500 m elevates your spirits. The park covers a massive 2000 km² of land, containing more than 1000 species of plants, 650 species of birds, 350 butterflies and many smaller forms of life.

Welcome at the airport and road to Nameri National Park. If early arrival, you can enjoy a nature walk in the afternoon. Night in hotel or resort.

The Camp organises exciting white river rafting, against the divine backdrop of lush forests and snow-capped mountains. Tourists can try their hand at casting for the elusive and endangered golden Mahseer fish, a denizen of the waters. This is part of an ecological campaign to save the mahseer - so part of the river is protected and the fish are caught and then released in a bid to stabilise their dwindling numbers. Night in hotel/lodge/resort.

After breakfast, drive to Eaglenest Wildlife Sanctuary. In Bhalukpong, the border town between Assam and Arunachal Pradesh, quick stop to show the Protected Area Permit. The journey is along a very scenic road traversing forested hills and crossing over the Nichephu pass to the Tenga valley. En route, stop at Tipi to visit a greenhouse of orchids with more than 7,500 flowers. Traversing the Tenga valley, the road climbs through a series of hairpins to the Sanctuary. On arrival check-in Lama Camp. Late afternoon birding around the camp. Night in tent. The foothills of the Himalayas are partly covered by very rich forests, of which 3,500 km² are protected in many protected areas such as the Eaglenest Wildlife Sanctuary. This protected sector of 217 km² is little known: it is nevertheless considered to be one of the ten richest ornithological sites in the world, alongside two others of the Manu National Park in Peru, the Mindo Valley in Ecuador and Taman Negara National Park and Danum Valley in Malaysia. It is in any case one of the best Indian sites to discover the Himalayan birdlife, with more than 450 species of birds recorded.

Start early in morning looking for rare Bugun Liocichla and other specialities of the area. Have breakfast back at the camp. Take packed lunch drive to Bompu camp. Full day birding passing by the Eaglesnest Pass (2800 m) and Sundar View (2470 m). Birding will be along a jeep track in temperate bamboo, conifer, broad-leaved forest and scrub. Night in camp.

Today, you will go for full day birding till Sessni, Evening back at Bompu. Night in camp.

Full day birding around the Lama Camp and base camp area. Night in camp.

After breakfast you will leave for Pakke Wildlife Sanctuary. En route, you will stop at various bird-watching locations for birding. Upon arrival at the sanctuary check into the forest rest house. In the evening, go around the rest house for some birding in Pakke. Night in camp/resort.

After breakfast full day exploration in Pakke. Night in resort/camp.

Today you will leave for one of the most beautiful wildlife destination and the UNESCO world Heritage site, famous for the highest number for One Horned Rhino in the world - Kaziranga National Park. Upon reaching Kaziranga transfer to the wildlife resort. After freshen up, one can go on a guided tour through the forest near your accommodation along the river bank. Also visit the tea garden and rubber plantation. Night in hotel/resort/homestay.

Early in the morning, you leave for Sivasagar. You will visit Joysagar, the biggest man-made lake in the country. Followed by, Sivasagar Sivadol, Rang Ghar, Talatal Ghar... Cherishing the beauty of the greeneries, you reached Dibrugarh, the tea city of India. Night in tea estate bungalow/hotel.

Leave for Deban where Namdapha National Park starts. At the border, clear the formalities to enter Arunachal Pradesh. Night in Forest House or camp.

After breakfast, go for trekking inside the Namdapha National Park. En route stop at Haldibari. Afternoon, walk to Hornbill Camp. Night in tent.

Leave for a trek to Ranijheel Camp site after breakfast. En route visit Bulbulia, where you will get to see hot sulfur springs which light up on fire. On the way spot many species of birds. Set up camp upon reaching. Spend the day bird watching and following small trails that have been left by mammals. An expert guide will always be present. Night in tent.

Today's trek is a steep downhill run, and has bamboo and secondary forest, and is great for bird watching. One is usually sure to see the Snowy-Throated Babbler on this stretch. Rest of the day will be free for bird watching in Firmbase. Night in tent.

After breakfast, trek to 25th mile camp. The trek will cross numerous sustainable bamboo bridges, core rainforest area and will be alongside the No-Dihing River. The area is good for spotting some rare wildlife. Setup camp, and spend the rest of the day exploring the forests around. Night in tent.

Walk back to the guesthouse in Deban through thick forests teeming with birds and fluttering with butterflies. From most part of the day you walk on the Miao - Vijaynagar road which offers some spectacular views of the park. Rest of the day free for bird watching. Drive back to Miao. Night in Eco Camp.

Drive back to Dibrugarh. Visit of tea garden. Night in hotel.