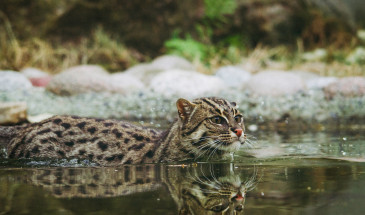 
Discover the Sundarbans National Park, which unfolds its authentic and magical landscapes for adventure-seeking travellers on a 5-day cruise. Between India and Bangladesh, a UNESCO World Heritage Site, at the heart of its 10,000 km2 stretches one of the largest mangrove forests on the planet, its name referring to it, sundri referring to a mangrove plant, and bans meaning “forest”. Here, the Rivers of the Ganges and Brahmaputra come together to create a delta towards the Bay of Bengal, whose multiple arms and canals are home to rich flora and fauna. Nestled in a forest of trees with imposing roots planted in the swamps live crocodiles, monkeys, wild boars, kingfishers, hummingbirds, leopard cats, axis deer, foxfish and many endangered species, such as the royal cobra, the Ganges dolphin, recognizable by its elongated beak, or the sea turtle. But Sundarbans National Park is best known for being the last habitat of the Bengal tiger, whose population today numbers only a few hundred.

Then return to earth to meet the Fishing Cat, solitary and territorial predator, hunting mainly fish and crustaceans and lives in wetlands (lakes, streams or mangroves) of Southeast Asia. The area around Amta is home to a large population of this feline and the villagers, after hunting this “fish thief” have turned into custodians. Our presence will only reinforce the idea that it is important to protect this fierce cat.

Morning welcome at the airport and road to Godkali, Sundarbans NP. From there, our journey continues for an extra hour and a half. We will then begin the cruise through many rivers such as Bidya, Hogol, Gomar, Gundi and Durgaduani. a cruise in the heart of the mangroves for a spectacular jungle safari. Night on board.

Enigmatic journey through the mangroves of the Sunderbans and visit various watchtowers and Canopy Walk with the ultimate goal of the Bengal Tiger and its cousins the Jungle Cat, Fishing Cat and Bengal Leopard Cat. Mysteries will unfold as the Sudhanyakhali Freshwater Pond gives you the perfect opportunity to meet many wild animals and birds. Lunch and dinner will be served on board.

The boat continues to sink into the delta and will pass through winding rivers and narrow coves of the Sundarbans. In addition to Sudhanyakhali, we will visit Do Banki and Nethi Dhopani (depending on tidal and weather conditions). Lunch and dinner will be served on board.

Last full day on the boat, through the mysterious mangroves. We will visit the Dobanki watchtower and take a walk in the canopy. The canopy walk in Do Banki will give you the opportunity to see the wildlife of a net enclosure and give you an idea of the terrain of the Sundarbans mangrove forests. Lunch and dinner will be served on board.

Boat safari in the morning before disembarking in Godkhali and being transferred to Amta. Night in resort.

Contemplating the rural life of West Bengal during the day and safari at night to have the chance to observe the Fishing Cat in its natural environment. Night in resort. Observing the flora and fauna in the swamps and man-dominated landscapes is tricky and we have developed a unique safari model. Our activities with wildlife are conducted at night, at dusk and at dawn. Travellers rest during the day and enjoy the comfort of the property and discover the local culture. At night, we use a silent electric vehicle, encourage a little walking and use lookouts to observe essentially cryptic and nocturnal wildlife. We have identified several places for lookouts, where one waits to watch the nightlife. Our safari is a unique opportunity to observe the Fishing Cat and other animals nearby. In these marshes, the Fishing Cat is the main predator and the local population rightly calls it the fish-eating tiger - MECHOBAGHA.

Breakfast and transfer to Kolkata airport. End of our services.