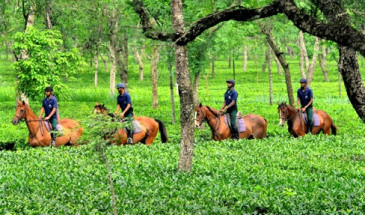 
Assam is the ideal destination for those who love horses and horse riding as it brings back the nostalgia of the life the British planters led. Ride along the banks of the Brahmaputra as the river comes alive. Enjoy an exhilarating canter along the sandy shores or just walk gently through the villages of the river people. The extensive trails in the tea gardens will also make an attractive ride. See the tea pluckers at work, plucking fresh green tips destined for the estate factory. Your hosts are Manoj and Vineeta Jalan who have pioneered equestrian tourism in the area. Manoj is a keen endurance rider and his fit and responsive horses reflect this. The horses are all thoroughbred types and require a competent rider. Included in this holiday is a two day visit to Kaziranga National park which is world famous for its one horned rhinoceros.

Your base during the ride is a beautifully renovated former tea manager’s Heritage Chang bungalow set in the midst of the tea gardens. From your veranda and over morning tea, you will hear the jingle of bicycle bells and the chatter of the tea workers as they walk or cycle to work.

Each day the rides explore the surrounding tea gardens and Brahmaputra flood plain. Throughout the area you will see farmers working their fields in a way unchanged for centuries.

After breakfast your ride takes through the rolling carpet of tea bushes and onto the banks of the Brahmaputra river – the best possible way to see the countryside as you journey unhurriedly and enjoy the thrill of riding along the beaches of the river and the grasslands, often encountering rural settlements. Lunch in a tree house. Afternoon at leisure. Evening, enjoy a cultural programme (Bihu Dance) on the lawns of the bungalow. Night in Chang Bungalow. Bihu is the most popular folk dance of Assam. The people of Assam are very proud of its unique position among all other such dances of India. Except Bhangra (the popular folk dance of Punjab), no other folk dance in India can compete with the rhythmic exuberance of the Bihu dance.

Post breakfast, the ride today takes you to the riverfront from where you embark on a boat cruise to a river island in the midst of the mighty Brahmaputra. A picnic lunch is organized. Enjoy kayaking on the river. Return late in the afternoon to the mainland. Evening at leisure/ free for shopping. Night at the Chang Bungalow.

Today your ride takes through a different tea plantation through the country side and paddy fields. Enjoy packed lunch. Return to the Chang Bungalow. Afternoon at leisure. Night in Chang Bungalow.

Today your ride takes through the lush green tea plantations of Ethelwold and Jalannagar Tea Estate. Later we take a tea tour around a tea estate known for producing high quality CTC teas. Learn all about tea - its origin, how it is grown, all about tea tasting and its quality. Return to Chang Bungalow. Post lunch we drive to Digboi (80 kms/ 02 hrs), the first Oil town of South Asia. We visit the Oil Museum and the 2nd World War Allied Forces Cemetery where 200 graves are permanently maintained by the Commonwealth War Graves Commission. Return to Dibrugarh for overnight stay at the Chang Bungalow. 'Digboi' : Digboi is a small but wonderful town in Tinsukia district in the north-eastern part of the state of Assam, India. Petroleum oil was discovered here in late 19th century and the Digboi oilfield is one of the oldest oil fields. With a significant number of British professionals working for the Assam Oil Company as late as until the decade following the independence of India, Digboi has a legacy of well-developed infrastructure and a number of bungalows unique to the town. It has a world class golf course with 18 holes as part of the Digboi Club. Note: Visit to tea factory is subject to being operational on the day of the visit. There is no tea plucking between December till mid-March and hence the actual manufacturing process of tea cannot be demonstrated when one visits the factory during this period. Factory also remains closed on Monday’s of the week. Digboi Museum remains closed on Monday’s of the week.

Today early morning we drive to Tinsukia Later we visit Dibru-Saikhowa National Park and Magori Bheel for a full day birding programme. We take several boat rides on the Dibru River, go for jungle walk, bird and Gangetic Dolphin sighting. Check in at Wathai Heritage Bungalow, Limbuguri Tea Estate. Night in bungalow. Dibru-Saikhowa National Park has the most distinct and vibrant wilderness on earth and is known for its pristine scenic beauty. The forest in this park ranges from semi-evergreen to deciduous to littoral to swampy marshes with patches of wet evergreen jungles. About 36 species of mammals have so far been recorded in Dibru-Saikhowa National Park – Royal Bengal Tiger, Leopard, Clouded Leopard, Jungle Cat, Sloth Bear, Malayan Giant Squirrel, Slow Loris , to name a few. Dibru-Saikhowa is a safe haven to many rare and endangered species of over 350 birds and is, perhaps, the best place to see three Indian specialities: Marsh and Jerdon's Babblers, and Rufous-vented (Swamp) Prinia apart from the rare Jerdon's Bushchat and Black-breasted Parrotbill, Several other rarely observed species can be found in the extensive grasslands, wetlands, and riverine forests. These include Baer's Pochard, White-winged Wood Duck, Bengal Florican, Pale-capped Pigeon, Rufous-rumped Grassbird etc. Recently it has been reported that The lesser white –fronted goose an endangered bird have been spotted at Dibru-Saikhowa National Park, 40 years after it was last seen at Kaziranga National Park. Dibru Saikhowa is a haven for an incredible no of waders, ducks, raptors and its speciality grassland birds. Although reverine in nature, this park remains open most of the year with innumerable varieties of colourful birds chirping at various pitches and hopping from branch to branch. It is indeed an orinthologist’s delight. Endangered species like Gangetic Dolphin and Feral Horses are common sights in Dibru- Saikhowa.

Today morning we ride through a different tea plantation through the country side around Limbuguri Tea Estate. Return to Bungalow for lunch. Post lunch visit Barekuri Village (10 Km / 20 min) to see a small group of Hollock Gibbons and later drive back to Dibrugarh. Night in Heritage Chang Bungalow.

Post breakfast we drive to Sibsagar to visit the Ahom monuments and temples which encompass the 600 year old history of the Ahom Dynasty. After lunch at Sivasagar, we drive to Kaziranga National Park and check in hotel. Night in hotel. Sibsagar was once the capital of the Ahom Kings. The Shans who came from Thailand through Northern Myanmar to this area in early 13th century, ruled for 600 years. The Siva Temple, built by the Ahoms, situated here is believed to be the tallest of all existing Hindu temples. The ruins of the Ahom palaces and monuments dot the landscape around this historical town. Centuries, before the arrival of the British, this part of the world was controlled by a number of tribal chieftains. In the town of Sibsagar, one can still see the remaining well preserved relics. The largest and the oldest ampi-theatre of Asia (Rang Ghar) is also another remarkable landmark in the history of Sivasagar. The Tai- Ahom Museum of Sivsagar contains some of the relics of the Ahom period like – swords, clothes, manuscripts and sundry artefacts.

You spend the full day exploring Kaziranga National Park, a world heritage site, is home to nearly two-thirds of the world’s Great One-horned Rhinoceros. The park has the highest density of tigers among the protected areas in the world and was declared a Tiger Reserve in 2006.You may also see large breeding populations of elephants, wild water buffalo and swamp deer. Night in resort.

Post breakfast drive to Jorhat/Dibrugarh/Guwahati airport to board flight for onward destination.