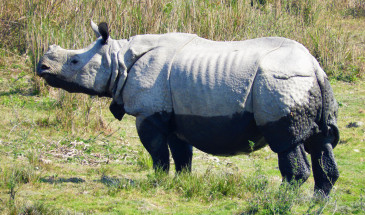 
Discover the wilderness of Kaziranga National Park, through grasslands and teeming forests. Watching wildlife in Kaziranga is similar to Africa, with wide beautiful landscapes that offer breathtaking views. You may also visit villages of the tribes who live a sustainable lifestyle much connected to Kaziranga.

Lying across the mighty Brahmaputra River and covering an area of 430 Km², the park is a UNESCO World Heritage Site since 1985. The one-horned Indian rhinoceros that roamed the north Indian plains in the wetlands of the Indus, Ganges and the Brahmaputra centuries ago now survives only in the north-eastern Assam and in the neighbouring Nepal, Bhutan, and Bangladesh.

Kaziranga is one of the few wild breeding areas outside Africa for multiple species of large cats, such as Indian Tigers and Leopards. Kaziranga was declared a Tiger Reserve in 2006 and has the highest density of tigers in the world (one per five km²), with a population of 125, as per the 2014 census. Other felids include the Jungle Cat, Fishing Cat, and Leopard Cats.

Welcome at the airport and transfer to Kaziranga. Free afternoon. Night in hotel/resort/homestay.

As you will wake up a little early to reach the Burapahar Range of the national park, you will be provided with packed breakfast. You can go trekking or walk inside the Burapahar range of the National Park. The track will start from Pani Juri Camp with a naturalist and forest guards, from here you will walk up to the banks of River Brahmaputra. You will go through the midst of the woodland that Burapahar is so famous for, during our trekking you will be able to see a lots of wildlife like Capped Langurs, Elephants and the Great Indian Hornbill and Hoolock Gibbon. After trekking you will return to Pani Juri camp. After lunch you will again visit the national park for your second vehicle safari of the day. This time you will explore the western range of Kaziranga. Here you will follow the route Bagori – Dongabeel – Rowmari – Rajapukhuri – Monabeel along with bank of Mori Diffalu river. One your way back to resort you can also stop at the Donga watch Tower for sometimes to have the glimpse of Wildlife. Later return to the resort.

Transfer to Guwahati airport (according to the flight schedule). End of our services.