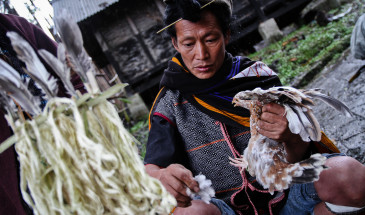 
Apatanis of Ziro in Arunachal Pradesh celebrate the Myoko festival in March every year. They attach importance to this festival as they have this age-old belief that by performing the rituals they can ensure fertility, both in the fields and in its people. Another aspect is the firm conviction that they can promote and strengthen family, clan and inter-village ties.

Road to Nameri National Park on the foot hills of the Himalayas and bordering Arunachal Pradesh. If early arrival, you can enjoy a nature walk in the afternoon. Night in hotel or resort. Many activities can be organized around the park: angling, rafting, hikes..

After an early breakfast, drive to Ziro. In Itanagar, visit of the Monpa Buddhist Monastery, the State Museum and the local market. Continue along the Ranga River to quickly enter the extensive foothills of the Himalayas. The mountain road cuts through densely forested hills and slowly keeps gaining altitude till you reach the Apatani plateau. Night in hotel or homestay.

Two complete days to explore Ziro Valley and witness Myoko Festival. You can visit the high altitude fishing farms where they grow fishes in the paddy fields, visit Hong and Dutta (Apatani villages) or the craft centre where you could do some shopping. Drive up to the view point near old Ziro and enjoy the view of the valley from top. Night in hotel or homestay.

Transfer to Airport (according to your flight schedule). End of our services.