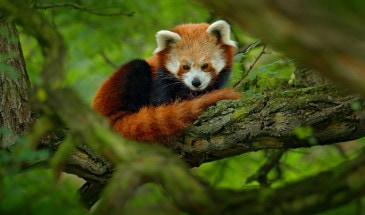 
Travel through the Himalayan forests of Singalila National Park, on the Indo-Nepal border, in search of the red panda.

Among the rarest mammals in the world, the red panda inhabits the mountain forests of India, Nepal, Burma and China. They thrive in forested areas, especially evergreen, semi-persistent tropical areas that are home to a dense undergrowth of bamboo (the panda’s favourite food).

The remote Singalila National Park, a vast strip of Himalayan forest on the border between Nepal and India, is therefore the ideal place to observe the rarest animals, its dense forests constituting a natural habitat for these solitary creatures and Tree. Singalila was the site of the first successful reintroduction of the red panda in 2004, documented in the film “Cherub of the Mist” (2006).

This fully guided expedition will allow you to spend 6 nights in Singalila National Park, accompanied by experienced trackers. In addition to the red panda, you can observe a multitude of birds from the eastern Himalayas, including exotic species such as tragopan, Horsfield scimitar babbler, Red-billed Leiothrix, brown-headed tesia and blood pheasant. Mammals, including Himalayan black bear, muntjac deer, pangolin, wild boar and leopard can be observed more rarely.

During your stay, you will stay in a simple but comfortable guest house, a picturesque home nestled in an area of the park notable for its high concentration of red panda. Naturalists will accompany you to the forests to observe the local fauna.

Spend 2 full days in the forest exploring Latpanchar and Mahananda WS. This place is a bird watcher's paradise, with more than 240 species of birds including: rustic swallow, garulax, souimanga, scarlet minivet, minla, Yuhina, dama thrush, magpie grieche, drongo, black bulbul, drongo, kingfisher, pheasant, pheasant Himalayan... Latpanchar is home to the most elegant, colourful and endangered species - the red-necked hornbill, which migrated from the Nepalese hills to Latpanchar for its favourable climatic conditions. During the four months of the red-necked hornbill breeding season (March to June), the female will lock herself in the cavity of a large tree. After entering the hollow, the female seals the hole with her droppings, mud and fruit pulp. Only a small slit remains that will allow the male to feed the female and then the cub. The female hornbill breaks the sealed nest when the small baby is large enough to leave the nest.

Transfer to Singalila NP. Night in the lodge. The lodge is located on Singalila Ridge, the border between Nepal and India. Located at an altitude of 2,900 m, it is a fabulous place to explore this beautiful, secluded region of the Himalayas, dominating the Singalila forests in all directions from its privileged view. The Lodge is located in an area of Singalila that is distinguished by the relatively high presence of these rare and endangered creatures. For most visitors to the lodge, the main attraction is the tracking of red pandas, although a small minority also plan to go trekking to the nearby Sandakphu Peak. Built from bamboo, wood and corrugated iron, Habre's Nest has a decidedly rustic charm. Its four double bedrooms are made of bamboo and wood furniture. Each room has private (Western) toilets and private balconies. Each room has heating, hot and cold water and drinking water. Electricity is provided by a generator from 5 p.m. to 6 a.m. The common areas include a small library, a dining room and a lounge bar with a fireplace. The meals served are a delicious mix of local dishes with a Western twist. Separated from the main house, there is a Bird Studio and lookout. Qualified naturalists and field biologists are on site at all times.

Every day, you start your activities with the wildlife of Habre's Nest after breakfast, around 8 a.m. Your wildlife watch will focus on the search for the red panda, but you will have enough time to observe other animals, especially the region's rich avian fauna of more than 300 species. A picnic will be provided for lunch and dinner will be served at the lodge upon your return each evening. Night in the lodge. Singalila is one of the best places in the world to observe the red panda in the wild, the observations will depend a lot on the conditions of the mountain. In dense fog and rain, opportunities for good observations will be limited. Slightly larger than a domestic cat and just as solitary, the red panda is a hard mammal to track. March-May, when rainfall is less abundant, offers the best chance of observation. The follow-up will be done on foot and in 4x4. The terrain is steep and hilly, and although you don't have to walk long distances, good physical condition will be helpful.

Transfer to Bagdogra or Pakyong airport (Gangtok). End of our services.