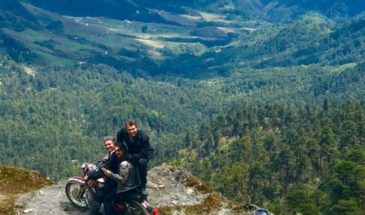 Open to tourists only since 1991, Bhutan is one of the countries that tries to preserve its culture and environment as best as possible. Hidden in the heart of the mountains of the eastern Himalayas, let us be the pioneers of this extraordinary country.

You will enter the Dragon Kingdom at Samdrup Jongkhar, between the Indian plains and the Bhutanese hills. A winding road with magnificent glances through the eastern hills will take you to the eastern region of Trashigang where you can discover several ancient sites.

Crossing the country from east to west, you will discover the monastery of Dramitse and then arrive in the region of Bumthang, the spiritual heart of the “Kingdom of the Dragon”, bathed in religious and popular legends.

These high valleys were among the first in the country to receive the teaching of Buddhism which was introduced here in the 8th century by Guru Rimpoche. Nowhere else will you see so many temples, monasteries and sacred places.

After visiting Trongsa, where the royal lineage originates, you will go for a walk in the beautiful Phobjika valley where the cranes with black collarcome to hibernate.

You will then arrive in the subtropical valley of Punakha, the winter seat of the Bhutanese clergy and its leader, the Je Khempo. The visit to Thimphu, capital of the Kingdom, will be followed by the discovery of the traditional Valley of Haa, before concluding in the enchanting Paro Valley with the excursion to the famous temples of Taktsang, the Tiger’s Lair, clinging to a cliff Dizzying.

Welcome at Delhi airport usually at night. Transfer and night at the hotel.

Morning flight to Guwahati. Choose a left window seat to contemplate the Himalayan peaks that seem to want to reach the sky. Welcome at Guwahati airport then drive through the plains of Assam and tea plantations up to the Bhutanese border. When you arrive at the hotel, you discover your motorcycles.

This is the big start, from the first kilometers you fall in love with the flexibility and comfort of the Royal Enfield, perfectly suited to the curves of the Himalayan foothills. We drive from ridge to ridge, overlooking the surrounding countryside. Bamboo forests and houses on stilts surround us. Then you go through Khaling, which means "Valley of the Birds." Stretch your ear! You can hear the melodious notes of many colorful birds, which reverberate in this enchanted and green valley. You visit a temple near Kanglung College, the Royal University of Bhutan. Then you arrive in Trashigang, to the east, not far from the Tibetan border. The city is known for its Dzong, a monastery-fortress emblematic of local culture, strategically perched at the end of a squeal and overlooking the valley. Overnight at the hotel.

Second city in the mountains after Thimphu, Trashigang is a very pleasant town. Its impregnable dzong controlled the entire region. The valley that leads to Trashi Yangtse is rich in historical religious sites.

Start your day along the Drangme Chhu River and take the famous Zigzag Route of Yadi, through mustard and corn fields. Colorful prayer flags twirling in the wind, manis, stone prayer walls and a chorten, the Tibetan form of Buddhist stupas, indicate the passage of the Kori La pass at 2450m altitude. You then descend into forests of rhododendrons and blue pines. Discover the village of Drametse, famous for its dance of drum masks, classified by Unesco. After this beautiful day, head to your hotel in Mongar, the first mountainside town that was established in the 19th century when the Site of Zhongar was abandoned. The current Dzong dates from 1953 and was founded on the order of the third King Jigme Dorji Wangchuck.

Long stage but again on splendid roads with passage of two passes. We leave through the thick jungle in which we can distinguish the fortress of Zhongar. Then we leave behind this semi-tropical climate area lined with bamboo and vines for a vast plateau. We are advancing again in a coniferous forest to begin the ascent of Bhutan's highest carriage pass, Thrumsing La (3800m). Travelling the country roads of the upper Ura Valley, through its fields and small villages, set out to meet a population still attached to its ancestral customs and values. Stop by the village of Ura to share a famous salted butter tea with its inhabitants. Visit the city and its monastery and soak up its authentic atmosphere. Then you cross Thrumshingla Pass at 3780m altitude, the second highest pass in the country. Feel the serenity of the majestic himalayan peaks that stand before your eyes. Overnight at the hotel.

Discover the Tang Valley that can be accessed by a very nice forest trail to the small village of Tang where you eat at home. The Tang Valley is the hidden jewel of Bumthang. It is known for its sheep and buckwheat (which blooms spectacularly in October). Visit Burning Lake and Ogyen Cholling Palace, as well as isolated and time-free communities and farms. Back to Bumthang.

After visiting the Jakar Dzong, you head to the nearby Chumey Valley. You will discover the traditional Bhutanese countryside and visit some temples and villages by motorbike and on foot. A very pleasant excursion through woods leads from Nyimalung Monastery to the village of Prakhar.

The road leads to the Yotong La pass (3425 m). Visit the museum in the old watchtower and then the Dzong de Trongsa, the most important in Bhutan and whose architecture is admirable. After lunch, take the handlebars back to the Chendbji Chorten, following the model of the swayambhunath stupa in Kathmandu. Après le Pelela (3420 m), vous prenez d’assaut les « montagnes noires ». Petit à petit, vous passez d’une forêt dense à un col couvert de bambous nains, la nourriture favorite des yaks. You will then discover the vast and beautiful glacial valley of Phobjika where the famous black-necked cranes migrate from the Tibetan plateau to protect themselves from the harshness of winter. It is in this valley that is the Gangtey Monastery, the largest Nyingmapa monastery in Bhutan, the oldest of the traditions of Tibetan Buddhism.

Visit Gangtey Goenpa, the largest nyingmapa monastery in the country, which overlooks the beautiful Phobjikha Valley. You then reach Punakha, beautifully located at the confluence of two rivers. This region is full of artistic richness. It was here that the first king of Bhutan was crowned and remains the winter residence of the royal family. The valley, low in altitude, offers comfort during the winter season and you can admire the richness of its flora. Rhododendrons, magnolias, laurels and fig trees grow in abundance. Join your hotel at the end of the day.

Visits and walks in Punakha

Visiting the sub-tropical valley of Punakha has one of the most beautiful dzong in the kingdom. An excursion to the Khamsum Yule Namgyel and then a stroll to the picturesque temple of Chimi Lhakhang, the temple of fertility, walking through the rice paddies.

Road to Thimphu, beyond the Dochu La pass (3100 m). You arrive in the capital in the late morning and start the tour after lunch. In the afternoon, stroll through the city, visit the Textile and Crafts Museums as well as the Dzong of Thimphu.

Beautiful winding road, which will delight any biker, even in the westernmost part of Bhutan. Long forbidden to foreigners because of its proximity to the Chinese border, the Haa Valley has preserved its authenticity. You will discover a traditional, rural and peaceful Bhutan.

The beautiful road that crosses the Chele La pass allows splendid glances at the Himalayas of Bhutan. Arrival in the Paro Valley and visit the Rimpung Dzong. End of the motorcycle raid.

In the early hours of the morning, go for a hike on the trail that leads to Taksang Monastery. Legend has it that in the 8th century, Guru Rinpoche, the father of Bhutanese Buddhism, arrived on the back of a tigress in the cave nicknamed "the nest of the tiger" to meditate. The ascent can be done on horseback but the descent is simply on foot. Located on the mountainside, as if defying the void, it is the holiest site in Bhutan, visited by all Buddhists at least once in their lives. The arrival is striking, you are proud to be able to admire the view, the waterfalls and visit the monastery. In the early evening, visit the 7th century Temple of Kyichu Lakhang. Find your hotel after an overwhelming day.

Flight in the morning (schedule varies depending on the season and the day) to Delhi. Transit in the airport hotel. Overnight at the hotel.

Free day. Transfer to the airport in the evening. End of our services.