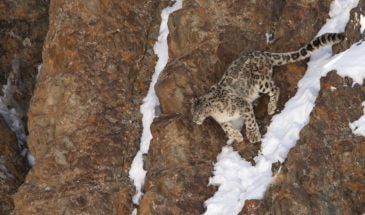 Season: April, May or November

In the high mountains of the Himalayan kingdom reigns a mysterious cat. Stealth. Powerful. Legendary. And endangered. It’s the gray ghost – The Snow Leopard (Panthera uncia)!

Already extinct in Bhutan, the Himalayan brown bear has less than 200 in Pakistan. India could be the last habitat with large numbers, but there would be between 500 and 700 left.

This winter, join us on an adventure in the Himalayan kingdom of Ladakh. Temperatures drop well below freezing and a blanket of white snow covers most of this primitive landscape. It is in winter that the chances of observation are at maximum because the snow leopard hunts the herbivores going down from the highest peaks of the mountains in search of food and water.

Although this trip to Ladakh has few gradients and the altitude is quite reasonable (between 3700 and 4300 m), the commitment is total in winter conditions, with nights in tents. No need for technical knowledge, however; however, this itinerary requires the traveller to be completely complaceced, a total confidence in our ability to cope with all situations. After all, the journey of a lifetime is rarely a predictable and bland experience! It is essential that you talk to us before deciding on this trip to Ladakh in winter.

SEASON:
From April to the end of November for the Himalayan Brown Bear
November to April for the Snow Panther
April, May and November for a combination of the two species

Welcome to Delhi airport and transfer to hotel.

Morning transfer to nearby domestic airport. This flight from Delhi to Leh passes over the great Himalayan chain. A memorable flight if the weather is good! Upon our arrival in Leh, transfer away from the city, to our friend Lobsang. His house has some spacious and comfortable bedrooms, with beautiful bathrooms; some even open onto a private terrace with stunning views of the Stok Range. Lobsang's house is about a 20-minute walk from the centre of Leh. From the roof of the house, we can admire the old royal palace! Meeting the guide, rest and walk in the city... to discover the small centre, and tame the Ladakhi winter. The old district, located under the royal palace and the central street where the Ladakhi women make the market, are worth a visit. Leh has changed a lot in the last 20 years with the rise of tourism, but during this season the city regains its atmosphere of great bazaar. Meal and night at the guesthouse.

We will have time to stroll around Leh, acclimatize gently, in addition to visiting the temples of the surrounding valleys: Hemis, Tikshey and Chemre. We begin with a visit to the monastery of Tikshey, 17 km upstream from Leh, on the right bank of the Indus. This monumental complex covers the entire hill, and houses 4 temples. Even more than these temples, the visit of Tikshey marks the visitor by its geographical location plunging over the valley, but above all by the beauty of the architectural ensemble perfectly integrated into the landscape. Further on we visit the monastery of Hemis, 25 kilometers from that of Tikshey. Founded in 1602, this temple is now the most important temple in Ladakh. Nestled in a beautiful valley adjacent to the Indus, the Hemis Monastery houses, among other things, an interesting "old temple" on the upper floor. Finally, we continue our day with a visit to the monastery of Chemre, located on a tributary on the right bank of the Indus River, north of Hemis. This monastery perched on a hump that it covers almost entirely is also typical of Ladakh in its integration into the landscape. Back on Leh, we spend some time at the Office of the Snow Leopard Conservancy. Very visited during the summer, everything is quiet at this season. Meal and night at the guesthouse in Leh.

Today you leave for an extraordinary road towards Taglang La and the villages of Gya Lhato and Meru. It is a fantastic road that takes you away from the Indus Valley and climbs a magnificent subsidiary valley. There are spectacular landscapes here and you have a chance to observe wild animals like the bharal, the golden eagles, the bearded vultures, to see the beautiful partridge of Hodgson and the most common Chukar partridge.

Today, start west on the road that runs along the Indus and leads to Kargil and Srinagar. You pass through the small town of Nimmu, one of the most important in Ladakh where Zanskar meets the Indus Stop at The Monasteries of Lamayuru. Upon arrival in Drass, you will be greeted by your guide and taken to the Lodge near Drass for a briefing, dinner and some rest after this long day.

Two days dedicated to the brown bear. Departure at dawn to join the spotters of the village for a short 45-minute hike on the hill, stopping on the way to scan the surroundings in search of brown bears and other wild animals. Once at the top of the hill, settle into one of the many viewpoints and peer over the horizon for brown hairball movements. The top of the hill offers spectacular 360-degree views of the Drass Valley with snow-capped peaks nearby. The famous tiger hill peak is also visible. With a good population of Himalayan brown bears, the valley is also home to the Himalayan fox, bearded and tawny vulture, smaller birds and a wide variety of wildflowers depending on the year If you wish to stay at the spotting sites beyond lunchtime, a freshly prepared packed lunch can be transported to your destination. You can also choose to go back down to the village where a hot lunch can be served by the locals. The afternoon or evening can be spent exploring the Drass Kargil area on foot or by car, and of course looking for more ursids.

Return to the Indus valley to Ulley in a village house in Ulley, visit the village in the afternoon and make final preparations for the crossing. Night at home (small stove in the room and hot shower with bucket).

Snow leopard watching in the Ulley and Rumbak valleys with the precious help of lookouts who crisscross the valley from morning to night. By spotting the snow leopard, the spotters tell us where to get quickly with the help of walkie-talkie. Sometimes you have to camp in order to increase the chances of meeting the "grey ghost". We have -20 degrees sleeping bags, hot water bottles and a great team (cook, camp aides) to make life at the camp more comfortable despite the extreme conditions.

Last day of observation before returning to Leh. Night in guest house.

Early departure for Leh airport. Flight to Delhi. We leave the Himalayas for a whole new world: Delhi! The chaos is out of place, as is the heat. Depending on the group's desire, we will visit a few sites by tuk tuk, or on foot, the opportunity to visit the city's must-sees such as Humayun's tomb or Kutub Minar, to stroll through the teeming spice market of Old Delhi but also to enjoy a last Indian meal in one of the city's delicious restaurants. Night in a hotel.

Day (free) of security in case of cancellation of the previous day's flight. Late transfer to the airport according to your flight schedule.