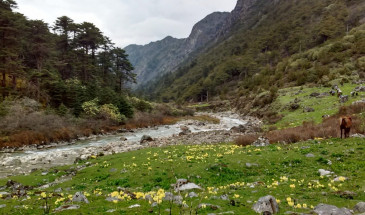 
“Bailey Trail” trek traces the historic route taken by Lt. Col. F M Bailey and Capt. H T Morshed, British officers who were commissioned to survey the lands between Arunachal Pradesh and Tibet during 1911-12. The trek was initially an ancient trade route that connected Burma, India and Tibet. In 1962 the Chinese army used this route to strike deep into Arunachal Pradesh. The ‘Bailey Trail’ as it is known now, crosses through some pristine remote forests of the Eastern Himalayas, where pine, oak and rhododendrons grow aplenty.

Throughout the trek, the presence of breathtaking landscapes will overwhelm you, and at times, you’ll be able to see the majestic peaks of Gorichen and Kangto, two of northeastern India’s highest peaks. The highest point of this trek will be Sela Pass at a height of 4550 m. Entirely, you’ll be crossing high mountain passes, glacial rivers, crystal clear lakes, villages of the Monpa Tribe, and will be staying at campsites that will awe you. And as a bonus, you’ll be visiting the Buddhist hill station of Tawang where the second largest Buddhist monastery of Asia is magnificently located.

Welcome at the airport and road to Dhekiajuli. If early arrival, you can enjoy a nature walk in the afternoon. Night in homestay in the heart of a tea plantation.

After breakfast, you go to Thembang via Shergaon, a small picturesque village located in West Kameng district. It is nestled in a valley punctuated by three streams and the fertile land on their banks is well suited to horticulture. Walnuts, pomegranates, kiwi and more than a dozen apple varieties thrive in the mild climate here. Night in homestay.

Today you trek uphill and reach Thungri, a place commanding beautiful views of the surrounding areas. Night in tent.

Acclimatization day. Short walk around the camp. Night in tent.

A day of hard trek with a steep climb through coniferous forests. This without considering the rewarding views on the himalayan landscape you will have the chance to enjoy. We will camp a little before reaching Changla. Night in tent.

Early morning, you will start the ascension and cross Changla Pass (3650 m) and Poshing La Pass (3950 m). You will then start the descent among the Juniper and Rhododendrons forests and cross a river before going up again through Potak pastures. We will camp here. Night in tent.

Early morning, you will start the ascension and cross Se La Pass (4550 m), the culminant pass of Bailey Trail trek, from where you will be able to view Gorichen peak and Kangto peak. You will also witness a beautiful lake during the descent towards Lorthum, where we will camp. Night in tent.

Bailey Trail trek will now follow the river and you will walk in the forest. You will encounter Yak huts on the way before reaching a part of Tawang-chu river and we will camp near Mago Village (3500 m). Night in tent.

Trek down to New Mealing. Night in tent.

Trek from New Mealing towards Jang, where the jeep is waiting for you. This is the end of Bailey Trail trek. Drive to Tawang. Night in hotel.

Walk for 30 minutes from the market in Tawang town and enter the Tawang monastery compound. Founded in AD 1680, Tawang Monastery is the largest Tibetan Buddhist monastery in India. Situated at an elevation of 3300 meters, the mesmerizing Buddhist citadel comprises 65 residential buildings which are home to 450 lamas. A centre for Buddhist cultural studies and a library with an invaluable collection of 400-year-old manuscripts are also found inside the compound. Also pay a visit to the museum and butter lamp house. Visit a craft center and emporium and shop for authentic woven goods and garments. Drive to the outskirts of Tawang town and visit Urgelling Monastery which was built around AD 1487. Almost two centuries later Tsangyang Gyatso, H.H. the 6th Dalai Lama, was born here in 1683. Pilgrims can burn incense and perform a candle lighting ceremony in which conical terracotta lamps are used. Next visit Khinmey Gompa which will impress with its kaleidoscope of glorious colors. Drive back to Tawang town for lunch. Visit the Ani Gompas or nunneries of Tawang are steeped in the same time-honoured Tibetan Buddhist traditions as their larger all-male counterparts. Night in hotel/homestay.

After breakfast, we go to Bomdila. En route we pass Nuranang Falls, the memorial of Jaswant Garh (in memory of the Indochina war) and the Dirang Ta Dzong (Tibetan old prison). Night in hotel.

Drive to Bhalukpong, evening enjoy the bon fire and relax. Night in hotel.

Drive to Guwahati Airport. End of our services.