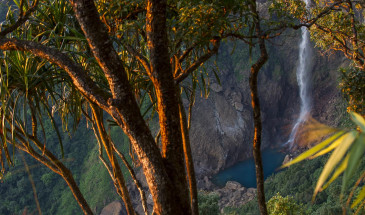 
Meghalaya has a number of valleys, highland plateaus and lush green hills and is speckled with big waterfalls. The abundant richness in nature and geography has made it possible for adventure tourism to boom in the form of aqua sports – kayaking, rafting, scuba diving to a leisurely angling. Once you from water to land you would discover many picturesque and unexplored trekking trails and camping options.

Start with the famous trekking trail named after the British officer David Scott, who was the then commissioner of revenue for erstwhile Assam. One of the few tangible remainders of the infamous David Scott, is the horse-cart trail that he built which stretched from Cherrapunjee, now properly called Sohra, to Bangladesh. This road caused a war between the Khasi people, led by U Tirot Singh, king of the Khadsawphra Syiemship and the British. The Khasi forces were finally defeated by British muskets, artillery and superior military strength but not before the bows, arrows and guile of the native people had given the English 4 years worth of guerrilla-warfare style grief. U Tirot Singh was ultimately captured and deported to Dhaka, now the capital of Bangladesh where he died on 17th July 1835.

The 16 km long trail is an old mule track, traditionally used by the locals as a trade route from Mawphlang to present day Bangladesh. The trail takes one past streams with sparkling water, lush green meadows, waterfalls, deep valleys and traditional Khasi villages.

Continue to Mawlynnong is Asia’s cleanest village covered by greenery, trees, hills, wonderful nature. Surrounded by virgin beauty of nature and waterfalls, Shilingjashai is one of the offbeat trekking routes in India’s North East.

After breakfast, you head to Meghalaya, the abode of the clouds, and its beautiful luxuriant hills. The road serpentines through sylvan hills and wrapped in the beauty of an assortment of green Khasi-pines and the azure blue skies. You can stop in Nongpoh for a pineapple tasting. Continue up to Umiam Lake and then Shillong. Night in hotel.

Transfer to Mawphlang to start the 16 Km trail (5 hours walk) to Lad Mawphlang called the David Scott trail. It is a part of the horse trail which dates back to the British era. You can make your way through meandering roads, gentle slopes, flat ground and a steep uphill climb before you reach Lad Mawphlang. The car is waiting for you and will drop you to Cherrapunjee. Night in hotel.

The Shella hike takes one along a path built by the British, centuries ago, connecting Bangladesh with Cherrapunjee. A three hour hike takes one from the Cherrapunjee bazar down to the border town of Shella. Take a two hour detour from Mustoh village to see the unique limestone fields at Rinsong. Night in hotel.

After breakfast, drive to Langkawet and check into our campsite, which is our base camp for the next couple of the days. Later explore the area. Night in cottage.

Pongtung to Byrdew falls hike: This 6-7 hour long hike originates at Pongtung village and passes through a forest to reach the beautiful Byrdew waterfalls. Return to camp from nearby Pomshutia village by vehicle. Lunch will be arranged at a local eatery enroute. Night in cottage.

Pynursla to Mawlynnong hike: This hike takes one along the King’s Path, an ancient pathway built by Kings for the hill traders to reach the border haats of Bangladesh. Along the way, one passes by the curious abandoned village of Kyndiar. Know of the legend that surrounds the abandonment of this village. Lunch will be arranged at a local eatery at Mawlynnong. Night in bamboo hut. Mawlynnong is best described as a veritable tropical paradise and a nature lover’s dream destination. All the houses are blooming profusely in every imaginable nook and cranny in a garden of flowers of exotic variety — orchids, birds-of-paradise, lilies.... Little stone paths thread between the houses and the entire village is impeccably clean. Spires of two churches grace the skies, and the people are a friendly and cheerful lot who endear themselves to the visitor immediately. The cacophonic symphony of the river rushing past, crickets, birds, and other sounds of the jungle here are a sheer delight for the senses.

After early breakfast, we will start trekking for Shilingjashai around 8 a.m. It is one of the sensational places of Meghalaya. Trekkers love to explore this place because of its own versatile beauty. We will get many extraordinary spots of nature during the trek (bamboo hanging bridge, living cliff bridge, living root bridge and Umterming waterfall where we will have our packed lunch). After taking some rest we will be back to the beautiful Mawlynnong Village. Night in bamboo hut.