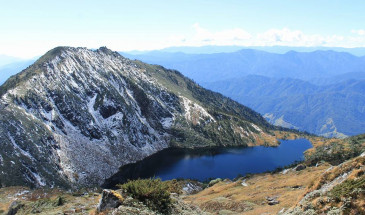 
This is a trekking circuit in the eastern part of the Arunachal Himalayas. The trek leads through tribal villages and green mountains of the Dree Valley. Tribal villages of the Idu Mishmi tribe are visited en route and there are overnight stays in tribal houses. This part of Arunachal is very infrequently visited, vast and wild for a complete exploratory trekking.

The villages you will visit of the Idu Mishmis in this area are one of the remotest regions of the world and people here live a life totally disconnected from the outside world. The Idu Mishmis are also known for maintaining venerable sense of social bonding and unity among its members through their unique socio-religious rituals in daily life, yet giving a sense of personal freedom to individuals so as to incorporate aspects of material progress in their lifestyle.

Welcome at Dibrugarh Airport and drive Arunachal Pradesh crossing the impressive Dhola–Sadiya Bridge, the longest bridge in India (9.15 Km). On arrival, you clear entry with your Restricted Area Permits. Later drive to Roing. Evening at leisure. Night in a traditional guest house. Among the blue ranges of the eastern Himalayas in the backdrop lies the Mishmi Hills of Arunachal, little down in the foothills lies the Roing and Tezu town and further down in the plain was the town of Sadiya, which was once a bustling town of Assam that was inundated during the great earthquake of 1950. For years, the shortest route connection to these areas was a tedious ferry journey across Lohit river. Bhupen Hazarika Setu is the longest bridge in India with a span of 9.15 km, connecting Sadiya and eastern Arunachal with Dholla. Deservedly named after one of the icons from North East India 'Bhupenda', it is an engineering marvel, started in 2011 and completed in a span of 6 years in 2017. Alleviating the people of their enduring journey on ferry across Lohit river this bridge is truly a people-oriented development. We need more of such project.

After the visit of some Mishmi villages (Abango and Kuruno), leave for a climbing drive to Hunli, entering the tropical blessed areas of eastern Arunachal Pradesh. En route cross Mayodia Pass, biodiversity hotspot covered in snow most of the year. Rest of the day will be at leisure. Night in basic guest house or in tent.

After breakfast, leave for Anini, a neat and pretty mountaintop town inhabited by the charming Idu Mishmi people. En route visit Mishmi villages such as New Anaya, Ranli and Angulin. Night in basic guest house or in tent.

Morning trek and then cross Dree river by hanging bridge to Agrimbronlin. Night in tent or Idu (Mishimi) house.

After breakfast trek to Acheson, the last Indian village in this region. Later trek back to Agrimbronlin. Night in tent or Idu (Mishmi) house.

After breakfast drive back to Roing. Night in Roing.

Drive back to Dibrugarh. Evening free at local market. Night in hotel.