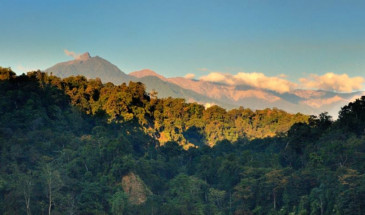 
Namdapha National Park in Changlang district on the eastern tip of the state was declared Tiger Reserve in 1983 by the government of India. Located close to Himalayan ranges, the stunning park that lies across various altitudes ranging between 200 and 4500 m elevates your spirits. The park covers a massive 2000 km² of land, containing more than 1000 species of plants, 500 species of birds, 350 butterflies and many smaller forms of life.

A details study of its species and genetic variation has not yet been thoroughly done. Namdapha is Botanist’s dream and it may take as long as 50 years to complete a comprehensive survey of its botanical resources. There are more than 150 timber species. The Pinus merkusi and Abies delavavi are not found elsewhere in India. One of the rarest and endangered orchids, the Blue Vanda found here. The most famous local medicinal plant Mishimi Teeta (Copti teeta), which is used by the local tribal for all kinds of diseases is available here but its export has been banned.

During the course of trekking witness the several types of vegetations and birds: Among the bird species, most notable are the White winged Wood Ducks, a rare and endangered species, the great Indian hornbills, jungle fowls and pheasants flop their noisy way through the jungle, and which harbours other colourful bird and animal species. The inaccessibility of greater part of the park has helped to keep the forests in their pristine and virgin state in its natural form. Moreover, the park possesses great bio diversity of flora and fauna. The lush green under growths are thick and intertwined like cobwebs of canes, bamboos, wild bananas and variety of vegetations The grandeur of the wet tropical rain forest is breeding ground for varieties of animals and birds which is remarkable and worth seeing.

After breakfast, drive to Deban. On the way we will cross Tinsukia, Lekhapani, Jagun. This road is known as a Stilwell Road which will be up to Jagun. Then we proceed to Namchik Gate to enter Arunachal Pradesh. Continue to Miao, the base camp of Namdapha National Park. You can visit the local market and the zoo. Our final 20 Km to Deban would be over a dirt track negotiating small rivers, patches of muck and landslides taking us around two hours. Evening free to enjoy the scenic beauty of Deban. Night in Forest House. Optional bonfire in the evening.

Start our trek with a thrilling crossing of the Noa Dihing river on a crude bamboo bridge. After a second smaller river crossing we enter into the wild rainforest world. The initial part of the trek is through bamboo and cane forest, graduating into a landscape of ultra tall trees. Set up camp and relax till lunch. Afternoon spend time bird watching in the surrounding wilderness. Night in tented camp. All through you will sense the liveliness of the forest through the hooting of Hollock Gibbons, deer calls and chirping of the birds like the Fulvous-breasted Woodpecker, Maroon Oriole, Rusty-bellied Shortwing and Oriental Pied Hornbill.

Leave for a trek to Ranijheel Camp site after breakfast. En route visit Bulbulia, where you will get to see hot sulfur springs which light up on fire. On the way spot many species of birds. Set up camp upon reaching. Spend the day bird watching and following small trails that have been left by mammals. An expert guide will always be present. Dinner will be served by the bonfire. Night in tented camp.

Today's trek is a steep downhill run, and has bamboo and secondary forest, and is great for bird watching. One is usually sure to see the Snowy-Throated Babbler on this stretch. Rest of the day will be free for bird watching in Firmbase. Night in tented camp.

Today's route mainly skirts the bank of the Noa Dihing, involving the crossing of some bamboo bridges built by the Lisu tribe. We trek through a spectrum of terrains ranging from grasslands, to river banks to thick evergreen forests. In the evening we explore some areas around our campsite in search of the magnificent Rufus Necked Hornbill. Night in tented camp.

Walk back to the guesthouse in Deban through thick forests teeming with birds and fluttering with butterflies. From most part of the day we walk on the Miao - Vijaynagar road which offers some spectacular views of the park. Then drive back to Miao. Night in Camp/Bungalow/Lodge.

Drive back to Dibrugarh. On the way, stop in Namphake village on the banks of the Bura Dihing and inhabited by the Tai community who believe to be the original descendants of the Ahom kingdom. You can learn about the unique Buddhist culture being preserved by this small community. Continue to Dibrugarh. Night in hotel.