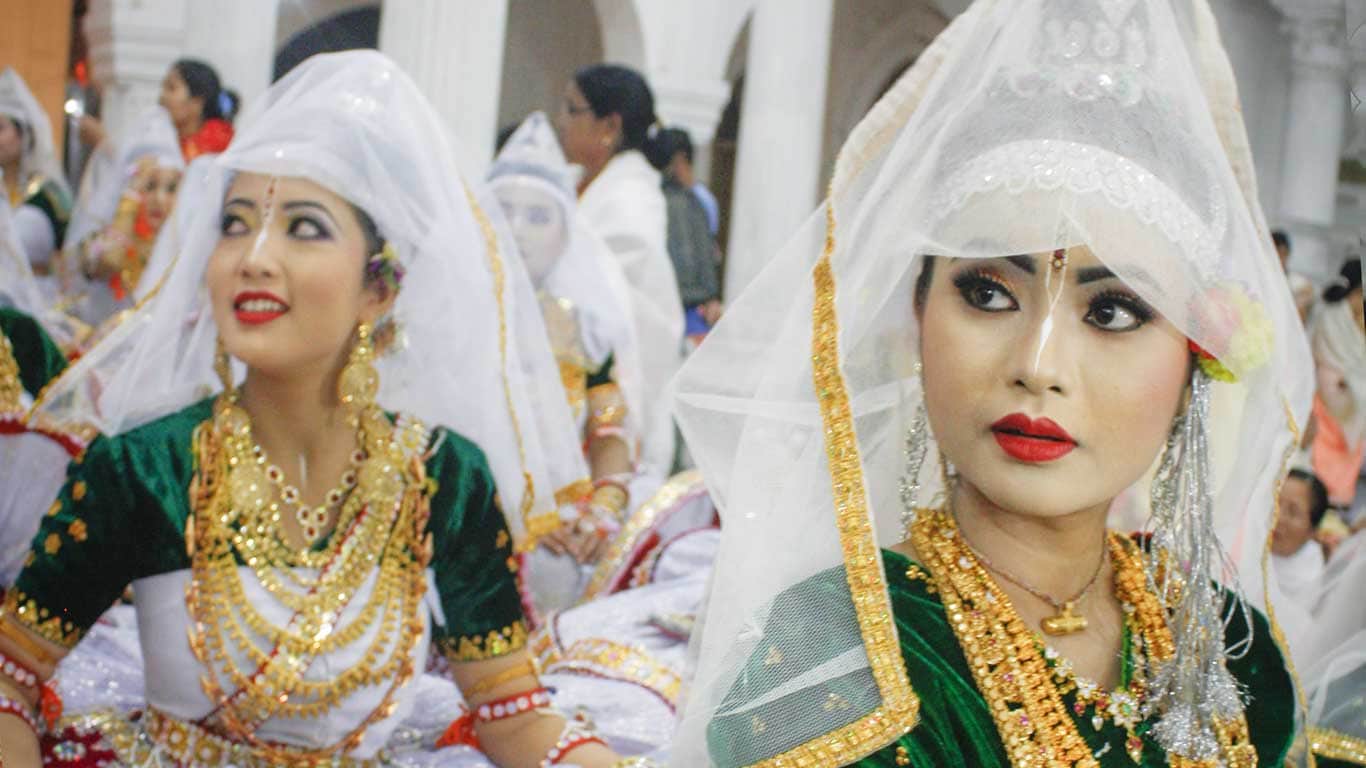 Manipur is a land of festivals, merriment and mirth all the year round. A year in Manipur presents a cycle of festivals. Hardly a month passes without a festival or two. To the Manipuri’s, festivals are the symbols of their cultural, social and religious aspirations which, besides removing the monotony of life by providing physical diversions, mental recreation and emotional outlet, it also helps them lead a better and fuller life….

This is the main agriculture festival of the year, which lies in the month of February and its celebration spread over a period of about eleven days. It is celebrated to mark the sowing season. The Village Chief sows some seeds in first instance marking the sowing season and then the rest of the villagers start to sow their fields. During all these days, merry-making takes the form of eating, drinking, games, dancing and singing. Dancing and singing usually commence in the evening, tall bamboo and pine resin torches light up the grounds and the dancers dance round the fire. Flickering lights, glimmering dresses and ornaments, flashing spears and daos with background songs add the attraction of the festival.

Over the years the Lui-Ngai-Ni celebrations has evolved to adding in dashes of modernization and is now also an occasion for youths to connect with their roots. It is also a platform for various local artistes and musicians to showcase their talents and enthral the people with their art.

Celebrated for five days commencing from the full moon day of Phalguna (February/March), Yaoshang is the premier festival of Manipur. The Thabal Chongba – a kind of Manipuri folk dance, where boys and girls hold hands and sing and dance in a circle, is particularly associated with this festival. Boys and girls and old women collect donations from house to house and the money so collected is spent in a number of parties and feast. Indeed, Yaosang to Manipur is what Durga Puja is to Bengal, Diwali in north India and Bihu to Assam.

During the festival, people clean and decorate their houses and prepare special festive dishes which are first offered to various deities. Celebrated during the month of April, a part of the ritual entails villagers climbing the nearest hill tops in belief that it will enable them to rise to greater heights in their worldly life. The Pangals (Manipuri Muslims) also observe it.

The Manipuri spring festival honours the many pre-Hindu nature deities revered in the regon. Special prayer ceremonies, dazzling displays of Manipuri martial arts and graceful ritual dances are performed to appease the deities. The most beautiful celebrations take place at Moirang.

The Kang Chingba is to Manipur what the Puri Rath Yatra is to Orissa. It’s an eight day religious festival that celebrates the journey of Lord Jagannath, his brother Balabhadra, and sister Subhadra. Thousands of devotees help pull the massive chariots that carry them. Feasting and dancing continue into the night.

Heikru Hidongba is the traditional boat race festival celebrated in Manipur during the month of September. It has been a celebration of great cultural and religious significance held every year at the sacred Thangapat in Sagolband Bijoy Gobinda, Imphal since 1779.
The festival is observed by offering of Heigru (Amalaki) fruit to Lord Bejoy Govinda on the 11th day of Meetei lunar month (Langban), accompanied with an exciting contest of ‘Hiyang Tanaba’ (Boat race) in traditional attires, which is the main highlight of the festival. The boats are operated by rowers and each boat has a leader or captain known as ‘Tengmai Leppa’. Thousands of people from different parts of the state gathered around the Thangapat to witness the event. The rituals and other highlights of the festival:

It is a remarkable social festival of the Meiteis. Married women of the family who were married to distant places come to the parental house along with her children and enjoy sumptuous feast. It is a form of family rejoinder to revive familial affection. The festival is also observed by the Pangals (Manipuri Muslims) to a certain extent now-a-days. It is observed on the second day of the new moon in the Manipuri month of Hiyangei.

This festival has been around for many years, and is an annual affair organised by the Manipur Tourism Department. It was dubbed the Sangai festival back in 2010 to highlight the state animal – the endangered brow-antlered deer (also known as the dancing deer of Manipur).  The festival is a definite must for anyone looking to enjoy the best of Manipur’s art and culture, music, dance, and local food. Did we mention the gorgeous textiles and crafts available at great prices?

This harvest festival – celebrated by Tanghkul Nagas in Ukhrul, Manipur – is based on an old Tangkhul custom wherein the daughter-in-law seeks permission from her mother-in-law to enter the family granary. This seven-day festival usually takes places between November and December, with the last three days witnessing processions, dances and music performances. Traditionally, this was an all-women affair and men had to spend the night outside, albeit with a generous supply of food and drinks. Interestingly, eating new rice before performing the ritual is taboo.

Ramjan Id is the most popular festival of the Manipuri Muslims (Meitei Pangal) in Manipur and is observed in the usual spirits of joy and festivities as in other Muslim world Ramjan is the ninth month of Hijri year since the time of prophet Mohammed and during this month the Muslims practice seld denial ny avoiding any food, drink and smoke from pre-dawn till sunset. During this month is spent on prayers. After the month on the second day of shawwal, when the new moon is visible they breakfast and this fast breaking day is called Id-Ul-Fitre. On this day, they go to the mosques to offer prayers and take delicious dishes, exchange greetings and call on the friends and relatives.

It is an autumn festival of the different tribes of Kuki-Chin-Mizo groups of Manipur. The festival has been variously described at different places amongst different tribes as Chavang-Kut or Khodou etc. It is a happy occasion for the villagers whose food stock is bountiful after a year of hard labour. The festival is a thanks giving feasts with songs and dances in merriment and joviality for all, in honour of the giver of an abundant harvest, it is observed on the 1st of November every year.

Celebrated for five days in the month of Wakching (December/Janaury) Gang-Ngai is an important festival of the Kabui Nagas. The festival opens with the omen taking ceremony on the first day and the rest of the days are associated with common feast, dances of old men and women and of boys and girls, presentation of farewell gifts etc.

Christmas – The festival of Christians (Dec)

The Christmas is the greatest festival of all the Christains of Manipur, observed for two days on December 24 and 25. Prayers, reading of Gospels, eating, singing of hymns, lectures on Christ, sports etc., form the major part of the festival. In some villages where the inhabitants are well-off, the celebration continues till Janaury 1 on which the New Years day is also observed.