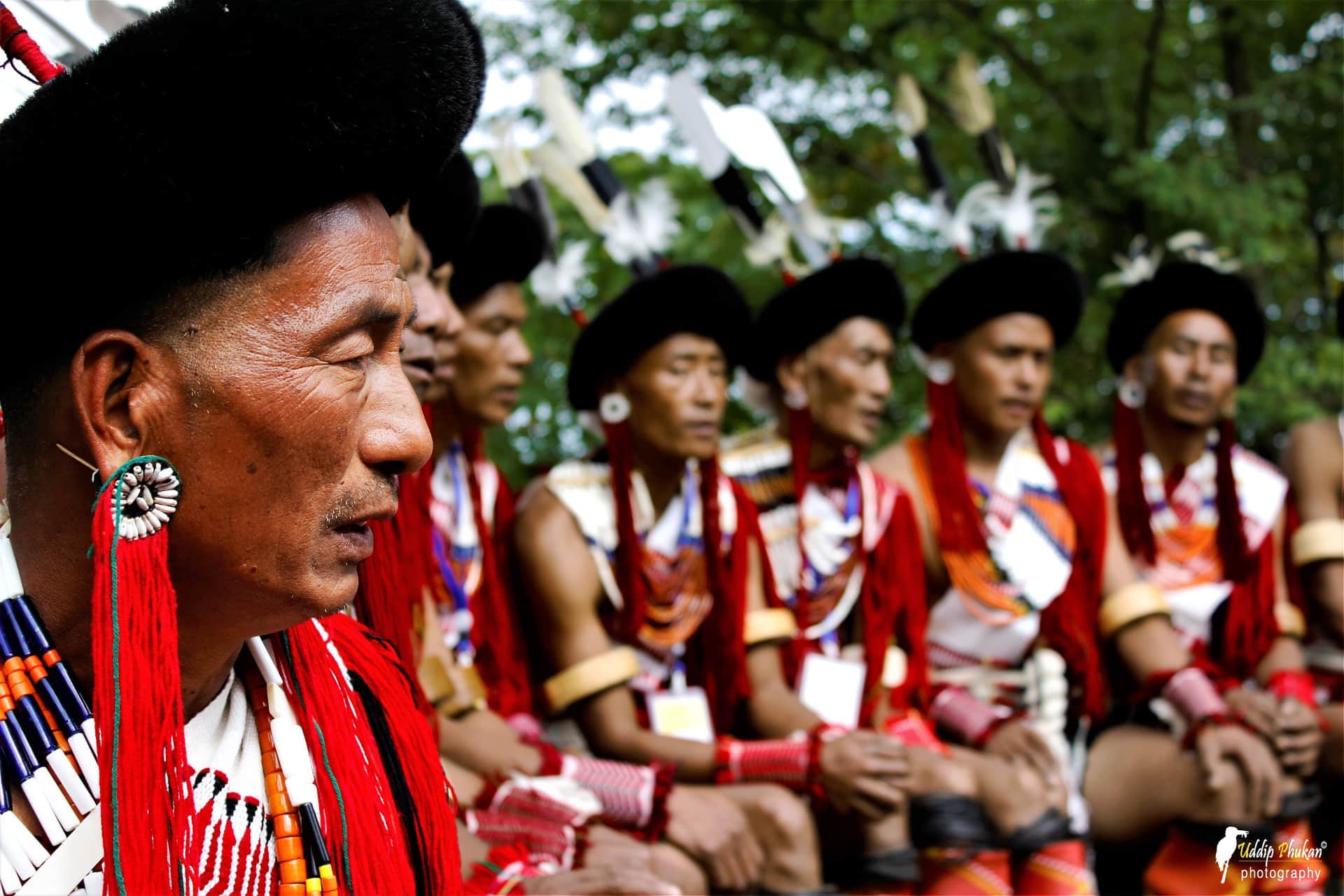 The Naga clothes which are so varied and rich in design not only serve the bare necessities of life but also reflect the socio political status and ritual significance from very design of the bearers. The textile weaving varies from tribes to tribes. Cotton is grown in plenty in Nagaland and Naga clothes are made of local materials.

The motifs, designs, and pattern however are quite complex and their symbolic meanings and usages are rather significant. They use natural dye made of tree roots and leaves for colouring threads.

The Nagas are famous for their shawls. Different tribes of Nagas have different types of shawls off their own designs and within the same tribe everybody is not allowed to wear any type of shawls by their choice as they signifies the social standing own by the person.

Naga shawls are not mere wrap against cold they are highly symbolic. Each tribe has its own special patterns and motifs and even certain ceremonies are indicated in the weaving of these beautiful wraps. The traditional Nagas have innumerable varieties of shawls skirts and other clothes with varied lengths and breadth, the designs and colours and their combination.

Among Angami tribals, the most common pattern in these social shawls is Lohe, red and yellow bands on black cloth. The lotha tribal shawls are woven into graded pattern- a series of shawls indicating the gennas he has performed. A Naga who has performed the stone dragging ceremony wears the Lungpensu – five stripes of light blue on dark blue cloth. The Ao warrior shawl is embellished with the deeply symbolic Mithun, tiger or elephant motif. Weaving is one of the most colourful and dynamic traditions of the Nagas.

A great deal of wood carving of Nagas is associated with religious beliefs and practices. Some of the excellent wood carving in the territory is to be found among the Wanchoo, Konyak and Phom tribes living close to the Burma border.

The carvings are mainly of Mithun heads, carved tigers and elephants, warriors with guns, monkey, dogs and dancing couples.

They now prepare different kind of armchairs, sofas, tables and jhulas for babies. In general it has been rightly said that Naga and most of the other important tribes of North East India “Start life in a cradle of bamboo and ends in a coffin of bamboo”.

The Nagas continue to practice to make earthen pots by hands alone without wheel. Unlike the bamboo works pots are produce by only few persons in few villages. Pottery among the Nagas is exclusively the art of woman. The woman makes different types of functional pots with patience with locally available sticky plastic light brown clay.

Blacksmithy, though a comparatively recent craft, is more popular. The smiths produce the normal requirements of villagers like the Dao, axe, sickle, jewellery, knives, spear points and butts etc. The Konyaks are the best blacksmiths. They make muzzle-loading guns as well. The Lothas regard this trade unlucky and believe that no blacksmith lives long after he stops the work.

Feel free to contact us if you are specific about which Arts & Crafts you would like to discover or would like to know more about them. Kriya, our professional material designer, will be eager to create a unique itinerary for you.