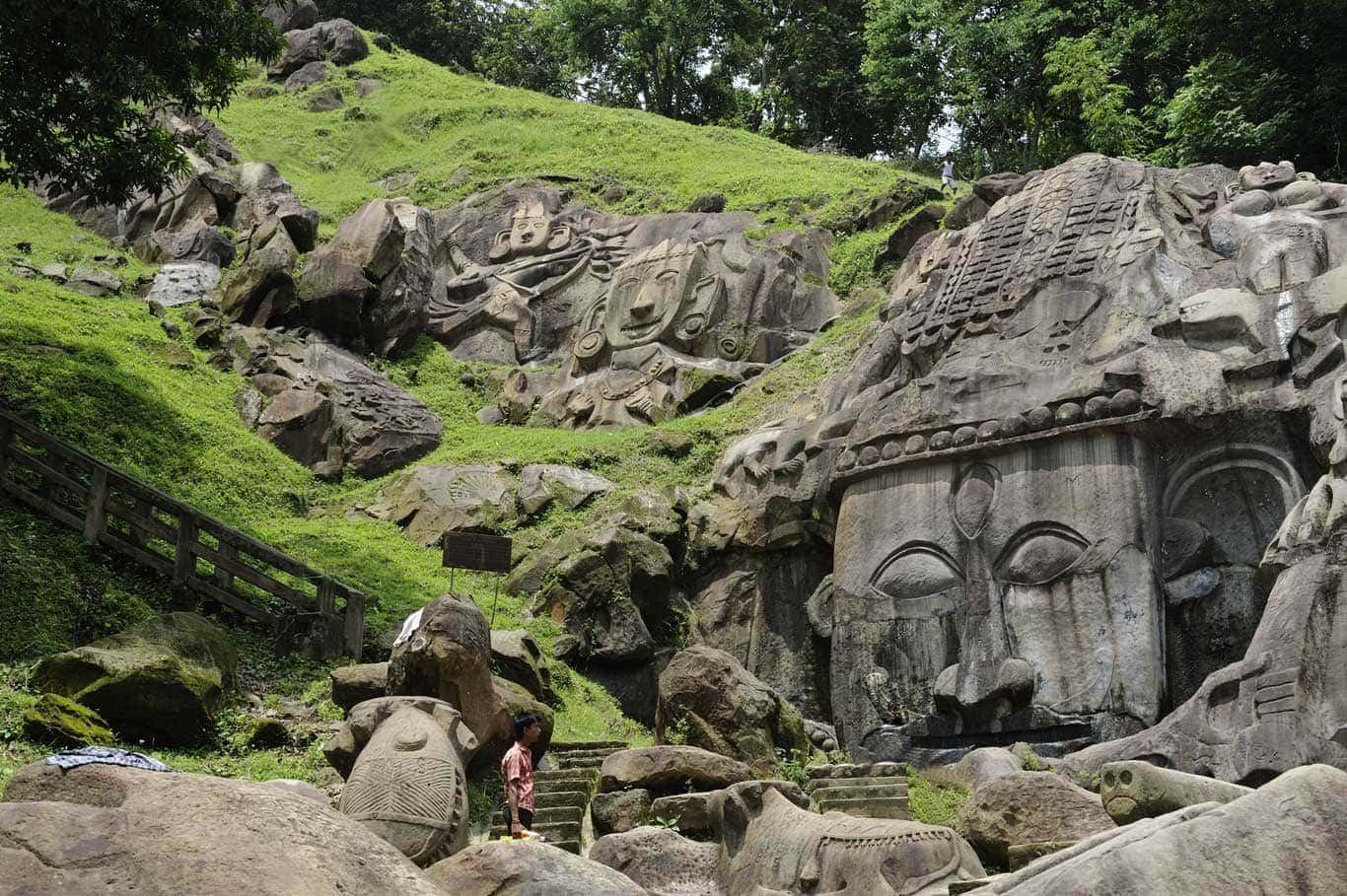 Also called Pous Sankranti, this Mela is held annually at Tirthamukh attracts hosts of devotees from Tripura’s neighbouring states as well. The Gomati River becomes the focal point of Uttarayan Sankranti, on 14th January. Thousands of people from all tribal and non-tribal communities converge on Tirathmukh, the birthplace of the river, to take a holy dip.

After Navanna, the festival of new rice, Ganga Puja is celebrated in March-April every year. This is another remarkable tribal festival. Ganga, it may be recalled, is one of the fourteen deities of the land. Like Garia Puja, this too is a community festival. People gather by the streamside, pare three piece of bamboo into beautiful flowers, the villagers then build a temple with bamboos in the middle of the stream, and the ageless rituals take place amidst joy and splendour. God is propitiated by the sacrifice of goats, buffaloes and ganders to save the people from any epidemic.

Garia Puja is a Puja done by the tribes of the state and is held on the seventh day of the month of April. This festival is celebrated as a harvest festival by the ethnic tribes and celebrations begin from last day of March-April. This festival is celebrated in a traditional way by the people of Tripura and celebrated throughout the state with a lot of splendor and joy. Children and youth play drums, sing and dance in front of the Lord Garia. They do this to please the deity.  People from all the communities seek the blessing of Lord Garia. The Puja is mainly conducted by Jhumias. A bamboo pole is worshipped with flowers and garlands by the tribals which symbolizes the Lord Garia. Various ingredients are used while conducting the Garia Puja. The ingredients used in the Puja are fowl chick, cotton thread, rice, eggs, riccha, rice beer and earthen pots. An important part of the Puja is sacrificing a fowl and offering the blood to the deity. This activity is done to please the deity and to seek his blessings. God Garia is worshipped so as to bestow the people with domestic animals, peace, children and wealth. The Puja is held to seek blessings. The sacrifice of cocks is an important feature and other important feature is dancing and rejoicing after the Puja. Garia dance is performed by the Tripuris and the Reangs.

Once a puja (worship ritual) exclusive to the royal family, Kharchi Puja is now one of the most popular festivals in the tiny state of Tripura. It’s a week-long event that attracts people by the thousands. There are many legends associated with it that are of tribal origin, including the cleansing of Mother Earth and the worship of 14 gods as prescribed by Lord Shiva. Animal sacrifice is also part of this festival, so those who have an aversion towards such things should be aware to avoid it. However, there are plenty of other attractions such as a fair and cultural programs.

Ker Puja is held after a fortnight of Kharchi Puja and is a traditional tribal festival. The deity of Vastu Devata is Ker meaning boundary or a particular area. People believe that the former rulers in the past used to perform this Puja for the general welfare and well being of the people of the state. A large piece of bamboo is used to make Ker and this bamboo is then used by the priest to perform the Puja. Ker Puja is the strictest Puja done by the people because of the association of various beliefs and aspects. The deities of Tripura are worshiped in this Puja. Every entrance or exit of the portion is entirely blocked to create a symbol for doing the Ker Puja. Expectant mothers and dying people are shifted to neighboring villages before starting the Puja. The people in the surrounded place are not allowed to go beyond the boundary till Puja gets finished. If any person enters the boundary by mistake, he is not allowed to move back from the place.The Ker Puja starts around 8 am to 10 am in the morning hours. People are not allowed to speak or laugh once the Puja starts. This Puja is done to defend the interest of the people from any misfortune, disease and poverty. The other reason is to save people from any external violence. Offering and sacrifices are an important part of Ker Puja. Dancing and rejoicing is done by the devotees after the Puja.

Other two important festivals of Tripura are Durga Puja and Diwali. Both are community festivals, but the former has attained the status of being the greatest community festival in Bengal and Tripura. The four-day long Durga Puja is generally held in autumn (Sep-Oct) every year. The immersion of the deity takes place on the Vijaya-Dashami or the fourth day of the Puja.

Orange & Tourism Festival is organized every year in Jampui Hill in the month of November during orange season. Jampui Hill is the only Hill Station in Tripura where large number of oranges are grown.