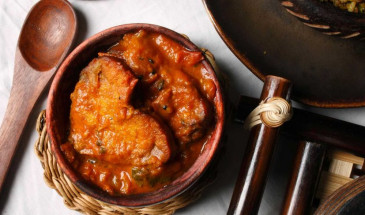 
If you really want to make a friend, go to someone’s house and eat with him… the people who give their food give you their heart. (Cesar Chavez)

The north eastern part of India is perhaps the most under estimated region when it comes to food. In reality, the seven sisters have a wide assortment of culinary styles influenced greatly by topography, climate, geographic location, and neighbouring regions.

The items are comparatively less spicy than the other parts of the country, but no less tasty. Food is prepared with minimum oil or ghee. Smoked and boiled preparations are also in vogue. Dishes prepared with duck meat, bamboo shoots etc are very much popular in North-East Zone. Smoking and consumption of alcoholic beverages are common in both men and women in the hilly states. Each community maintains its own identity and culture of language, art and culinary specialities with their integral traditions forming part of their daily lives.

The cuisines of these regions are as varied as the tribes themselves. Food is simple and for the most part non-vegetarian. Their close proximity to China and Burma has played their part in influencing the cuisine.

Starting from the bustling city of Guwahati, where the conglomeration of the various ethnicities of northeaster India has opened doors to various restaurants that offer some unique cuisines, the tour will lead on to the rain-fed forested and grassy hills of Meghalaya.

You will visit Shillong, a lush and beautiful hill station, and Cherrapunjee, the world rainiest village. Populated mostly by the Khasi Tribe, the region will provide an opportunity to taste the delicious Khasi food, which mostly consists of various meat items, herbs and organic vegetables. Beside the cuisine, you will be visiting the various lakes, waterfalls and living root bridges that the region is famous for.

Continuing on to the fertile grasslands of Kaziranga National Park, a world heritage site teeming with wildlife, you will get a chance to experience safaris into the jungle. The popular ecotourism destination has many restaurants where you will get to taste traditional Assamese and Mishing tribal cuisines.

Lastly, the tour will continue to the verdant mountains of the Nagaland, the land of the fierce Naga tribes. In the hill station of Kohima and surrounding simplistic villages, you will get to taste India’s most exotic cuisine, dishes which deal with all kinds of meats, birds and insects. Nevertheless, some of their more normal items, such as those consisting of chicken, pork or beef, are quite delicious and can be eaten by anyone.

In this tour, along with the exotic cuisines, the nature, cultures and wildlife of Northeast India will overwhelm the traveller just as much.

Arrive at Guwahati Airport and drive to city for overnight stay. Since Guwahati is a bustling city with ethnicities from almost all the religions and tribes of Northeast India, for dinner, you may choose from Assamese, Nagamese, Indian and Khasi cuisine. Night in hotel.

After breakfast, drive to Balipara where we arrive for lunch. Delight in the experience of elegant tea party… in fact the most aptly named tea party in the world… one laid out in the tranquil setting of a genuine tea garden! Gaze down the road framed by towering trees and experience the full impact of seeing your majestic ride trundle towards you. Clamber on top of the magnificent beast, one of the most revered creatures in India. The mahout (elephant minder) then gives the signal to ride out of the estate through local villages, bamboo groves and farmland, across babbling brooks and dried up river beds where, on a clear day the distant Himalayas are visible, and finally into the neighboring tea garden where a white lacy cloth-covered table set with classic bone china awaits.

In the morning, you will receive a personal introduction to the romance of tea tasting at our tea bar in the First Flush dining pavilion where 57 different types and grades of tea from every corner of the world are on display. You will be guided through the 3 steps required in determining the quality of tea. Firstly, assessing the visual appeal of the dry leaf; secondly, studying the appearance of the liquor (the liquid resulting from infusing the dry leaf in boiling water); and thirdly, appraising the taste. In order to make the Tea Tasting introduction especially flavourful we have put together an array of unique blends using both alcoholic and non-alcoholic beverages and extracts. So please enjoy sampling our wide boutique of teas and even create your own personal blend to take home. In the afternoon, why not pick some fresh seasonal produce from the vegetable and herb gardens, come into the kitchen and learn to cook a selection of North Indian, Assamese and Anglo-Indian dishes?

After breakfast, we will drive to Jorhat and set in a beautiful mansion. Feel the ambience of colonial days as you relax in the period furniture and décor. A sense of déja vu pervades when you realize that this was from the lifestyle of pioneering Indian businessmen of the 1930s. Enjoy the rest of the day roaming around the Assamese village of Jalukonibari. Peep into the homes of metal-working artisans & master weavers, whose exquisite work may never be seen by eyes beyond this village, except yours. The laughter and music that is unique to this part of the world is yours to savour.

After breakfast, drive to Shiyong. Located in the middle of a tea estate 'The Konyak Tea Retreat' is a working farmhouse amidst tea bushes, lemongrass, fruit bearing trees and tropical flowers. Night in homestay.

Road to the Myanmar border in the traditional village of Nyahnyu. Here you can partake in the daily routine of the villagers, fetching water in long bamboo pipes, helping the family in cooking, grinding rice and making jewelry from beads. Night in homestay.

After breakfast, drive to Mokokchung, home of the Ao Tribe. Indigenous cuisine is offered, and interested visitors can even try cooking their own meals. Night in homestay.

After breakfast, leave for Kohima. Located in the Naga Hills, Kohima is a beautiful hill station bustling with members of various Naga tribes. In and around Kohima, you will visit various sustainable villages of the tribes, interact with them and taste the Naga cuisine which is famous throughout India for its variety of meat and exoticness. Night in homestay or hotel.

After Breakfast leave for Kaziranga National Park, the abode of one horned rhinoceros. Reaching there we check in at Hotel. Night in hotel/resort/homestay.

You spend the full day exploring Kaziranga National Park, a world heritage site, is home to nearly two-thirds of the world’s Great One-horned Rhinoceros. The park has the highest density of tigers among the protected areas in the world and was declared a Tiger Reserve in 2006. You may also see large breeding populations of elephants, wild water buffalo and swamp deer. Night in resort.

After breakfast (either English or Indian), you will depart for Shillong, the capital of Meghalaya and a gorgeous hill station which was once a holiday destination for the British during the Raj. For lunch and dinner, you will visit 2 local restaurants which serve delicious ethnic cuisine of the Khasi Tribe. Rest of the day will be spent sightseeing around Shillong, where you’ll visit lakes, waterfalls and the Shillong Peak. Night at Ri-Kynjai, a beautiful 4 star resort, also famous for serving some delicious local cuisine.

After breakfast, drive to Cherrapunjee, where the sign 'the rainiest place on planet Earth' greets you. The road to Cherrapunjee through the East Khasi Hills winds through dense pine and oak forests, full of ferns and orchids. En route are dramatic gorges and ravines, waterfalls and limestone caves. After whole day of sightseeing, night in hotel.

After breakfast, leave for Guwahati. Night in hotel or homestay.

Transfer to the airport. End of services.