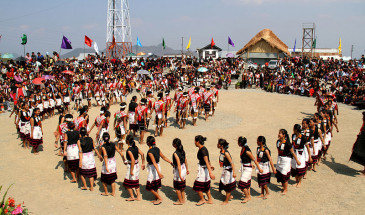 
Sekrenyi festival is the main festival of Angami Nagas. It is mainly celebrated in Kohima on February and lasts 10 days.

Sekrenyi festival is associated with a series of rituals and ceremonies. The first among the series of rituals is “Kizie”. The lady of the house takes few drops of rice water from the top of the jug which is called “Zumho”, and puts it into leaves and placed them at the three main posts of the house.

The first day of Sekrenyi festival starts with all young and old men going to the village well for bathing. During the night, the well is cleaned by two young men. After the cleaning of the well is over, some of the village youths guard the well at night so that no one fetches water after cleaning the well.

The womenfolk particularly are not allowed to fetch water from the well. All the young men of the village take a bath in the well in the next morning. The whole process of bathing is carried out in a ceremonial manner by the men of the village.

Send us an enquiry or contact-us about Sekrenyi festival !

Welcome at the airport and then transfer to Dibrugarh. Night in Heritage tea bungalow or hotel.

Post breakfast you drive to Sibsagar to visit the Ahom monuments and temples which encompass the 600 year old history of the Ahom Dynasty. After crossing the Assam-Nagaland border, you encounter some hilly terrain. En route stop at Moran for lunch. Night in guest house or homestay.

Early morning, drive to Chui village. Later return to Mon and after having breakfast full day excursion for Longwa. En route stop at the bank of river Tapi / Taphi and have the packed lunch. Later, return to Mon. Night in basic guest house or homestay.

After breakfast, drive to Mokokchung, home of the Ao Tribe. Night at basic hotel/guesthouse.

Drive to Tuophema Village. En route visit Wokha, the Lotha and Angami tribe belt. The time in the afternoon can be used for the exploration of the hamlet, especially the stone from where the villagers are known to take their designs for shawls and baskets. For a well spent evening, you can observe the cotton spinning by the local women along with traditional music and songs of the state. Night in the traditionally built cottages.

After breakfast, depart for Khonoma Green Village. While touring the entire place, you will check out the local women weaving fine shawls in different colours as well as designs. Spear making art and cane basket craft can also be seen as an activity among the men of the village. You might meet the National Winners in cane basket making here at the village itself. A visit to Morung is also scheduled. It is supposed to be a ceremonial gate according to the locals from where the history and culture of the place is passed on to the coming generations. There are some forts to cover as well. Night in hotel or homestay.

Spend the 2 next days celebrating the Sekrenyi Festival. Walk through different villages, meet the locals. Discover the cultural hub of Nagaland. Observe the lifestyle of the Ao Tribe, visit their homes, and learn more about their customs. Visit the district art and culture museum and the town centre to look for hand woven shawls. Another great excursion can be to the nearby village of Mopungchuket. Night in hotel or homestay.

After breakfast, drive to Jorhat where you can enjoy a guided visit to a nearby factory, followed by a tea tasting tour of the different grades of tea produced in the factory or the Gibbon Wildlife Sanctuary or visit some nearby villages to observe the simple and sustainable lifestyle of the Indian countryside. Later in the evening, a cultural dance performance can be organized if there’s a group of more than 4 persons. Night in hotel.